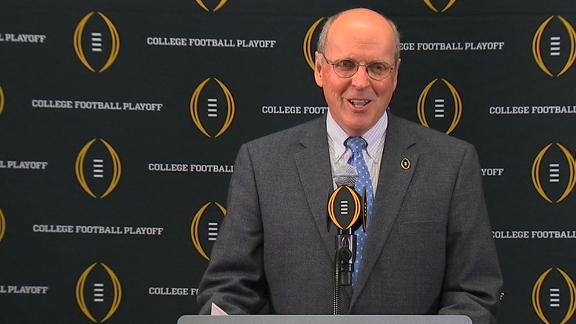 Atlanta will host the College Football Playoff National Championship Game in 2018, followed by Santa Clara, California, in 2019 and New Orleans in 2020.

The venues were selected from a group of nine bids to host the title game, including Houston, South Florida, Charlotte, Detroit, Minnesota and San Antonio.

Bill Hancock, the executive director of the College Football Playoff, said northern cities weren't ruled out because of weather concerns and will "be very much in the hunt" to host future games.

"We do want to move the event around," Hancock said. "It's just that we had better bids and better situations in other cities."

The College Football Playoff matches the No. 1 seed vs. No. 4, and No. 2 vs. No. 3 seeds in semifinal games that rotate annually among the Chick-fil-A Peach Bowl, Goodyear Cotton Bowl Classic, Capital One Orange Bowl, Allstate Sugar Bowl, Rose Bowl Game presented by Northwestern Mutual and Fiesta Bowl.

This season's semifinals will take place Dec. 31 from the Cotton Bowl and Orange Bowl, followed by the title game on Jan. 11, 2016, at University of Phoenix Stadium in Glendale, Arizona.

The 2017 championship game had already been awarded to Tampa, Florida.