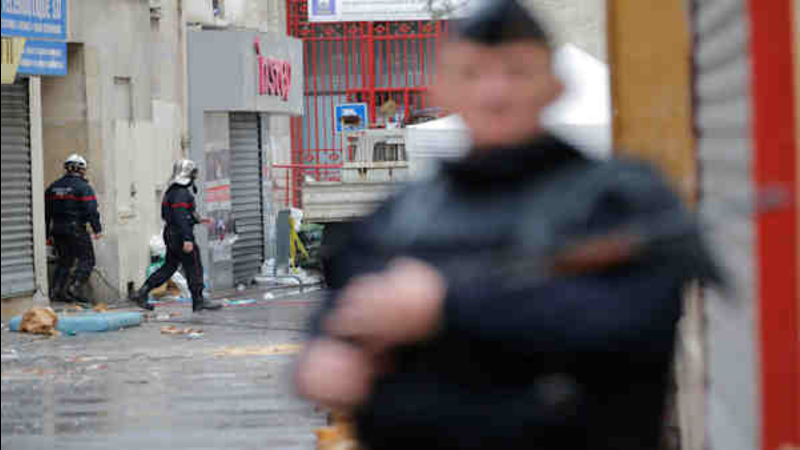 PARIS -- The hunt for the mastermind of last week's attacks took a bloody turn Wednesday to a Paris suburb where a fierce gunbattle with police left at least two people dead and eight arrested. The fate of the alleged ringleader was unclear, with authorities saying he was not taken alive and they were trying to determine if he died in the raid.

Police launched the operation after receiving information from tapped phone calls, surveillance and tipoffs suggesting that 27-year-old Abdelhamid Abaaoud was holed up in an apartment in Paris' Saint-Denis neighborhood.

Terrified residents awoke to gunfire and explosions as a SWAT team swooped in and "neutralized" what Paris Prosecutor Francois Molins called a "new team of terrorists" that appeared ready for a new attack.

Molins said the identities of the dead were still being investigated, but that neither Abaaoud nor another fugitive, Salah Abdeslam, was in custody.

"At this time, I'm not in a position to give a precise and definitive number for the people who died, nor their identities, but there are at least two dead people," Molins said.

The site of Wednesday's raid is not far from the Stade de France soccer stadium; three suicide bombers blew themselves up outside the stadium during an international soccer game as part of the attacks last Friday that left 129 people dead and hundreds wounded.

Molins said police units including snipers threw grenades and fired 5,000 rounds in an hourlong gunbattle that began before dawn on Wednesday. The dead included a woman who was believed to have blown herself up with a suicide belt, though Molins said "this point needs to be verified by an analysis of the body and human remains."

Five police were wounded and a SWAT team dog was killed in the intense gunbattle during which the third floor of the apartment building collapsed.

Residents described hunkering down in fear.

"We tried to stop our children hearing the noise," said Farah Appane, who lives about 80 yards (meters) from where the raid took place. "My 19-month-old was crying. Our 8-year-old said 'What is it? Are there more attacks?'"

She said she could hear gunfire on and off for over an hour, followed by "one really huge boom."

The head of one of the special forces units that took part in the raid, Jean-Michel Fauverge, said police used drones and robots equipped with cameras in an attempt to see what was going on inside during the raid but there was too much debris.

When they entered the building they found a body that had fallen from the third floor to the second, he told the French newspaper Le Figaro.

"The corpse was mutilated, probably from grenades and he wasn't recognizable," Fauverge said. "Other people were in the stairwell, two men hiding under blankets and whatever they could find. We arrested them."

Molins said five men were taken into custody in the apartment building, including two who were pulled from the rubble. A woman and two other men, including the man whose apartment was used as the cell's hideout, were arrested on a nearby street.

Authorities didn't release their identities; Molins would only say that Abaaoud and Abdeslam were not among them.

Investigators have identified Abaaoud, a Belgian of Moroccan descent, as the chief architect of the attacks Friday against the soccer stadium, a crowded concert hall and popular night spots in a trendy Paris neighborhood.

A U.S. official briefed on intelligence matters said Abaaoud was a key figure in an Islamic State external operations cell that U.S. intelligence agencies have been tracking for months.

Abaaoud is believed to have escaped to Syria after a January police raid in Belgium, but he has bragged in Islamic State propaganda of his ability to move back and forth between Europe and Syria undetected.

Belgian Justice Minister Koen Geens also said he could not confirm whether Abaaoud was among those killed in the raid.

Speaking after the seven-hour siege ended, French President Francois Hollande praised the bravery of the security services and said that France was "at war" with the Islamic State group, which has claimed responsibility for the attacks. He called for an international coalition to destroy the group, which controls territory in Syria and Iraq.

Britain said one of the Royal Navy's most advanced warships would support a French aircraft carrier that is on its way to join operations against IS militants in Syria.

In its English language magazine, the Islamic State group said it will continue its violence and "retaliate with fire and bloodshed" for insults against the Prophet Muhammad and "the multitudes killed and injured in crusader airstrikes."

On Wednesday, a video was posted on the Daily Mail website that appears to come from security cameras showing an nearly empty restaurant erupt into chaos with bullets smashing into walls and diners and staff diving for cover. A gunman is seen briefly when he approaches the restaurant's terrace and points his rifle at someone laying on the ground. A moment later he leaves, and a woman rises and dashes for safety.

The restaurant is not named in Daily Mail's accompanying article but examination by The Associated Press suggests it is Casa Nostra, a pizzeria near the Bonne Biere, another restaurant hit by the attackers and where five people were killed.

The attacks have put France on edge and the raid Wednesday only heightened fears that there could be more cells preparing to strike.

French authorities have said seven attackers were killed Friday - six who blew themselves up and one who was killed by police. Abdeslam got away, as well as possibly another, so far unidentified, assailant, officials said.

Molins said Wednesday that investigators found a cell phone in a garbage can outside the Bataclan concert hall where 89 of the victims of Friday's carnage died. It contained a text message sent about 20 minutes after the massacre began. "We're off, it's started," it read.

Molins said investigators were still trying to identify the recipient of the message.

A Spanish security official said Wednesday that French authorities had sent a bulletin to police across Europe asking them to watch out for a Citroen Xsara car that could be carrying Salah Abdeslam, whose brother, Brahim, was among the attackers who blew themselves up.

French authorities have said most of the attackers - five have been identified so far - were unknown to them. But two U.S. officials said that many, though not all, of those identified were on the U.S. no-fly list. The officials spoke on condition of anonymity because they weren't authorized to discuss the issue publicly.

French authorities declared a state of emergency after the attacks, and security forces have conducted 414 raids, making 60 arrests and seizing 75 weapons, including 11 military-style firearms, the Interior Ministry said. Parliament is expected to vote by the end of the week to extend the state of emergency for three months.