Mom Who Shielded Sons in Dallas Shooting Thanks Police 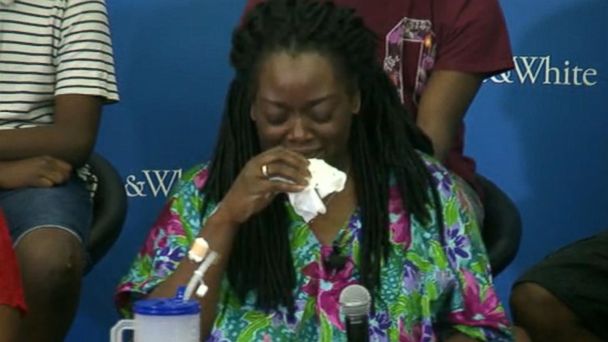 Shetamia Taylor, the 37-year-old woman who helped protect her four sons from bullets during an ambush-style shooting on police at a protest march in Dallas, broke down into tears today as she told the story of how she survived the carnage of that night.

Taylor said she heard two gunshots when the shooting began Thursday night, and then saw an officer fall to the ground.

"He said, 'He has a gun, run,'" Taylor recalled, before choking up with tears.

"I was running behind them and I felt the bullet in the back of my leg," she said, pausing to gather her emotions. "My son went to grab me but I was already shot so I grabbed him and lay on top of him. Police asked was anybody hit, because he didn't know I was shot. I said yes, but not loud enough because I didn't want my son to hear. The officer got on top of me and covered me and my son. Another cop [was] at my feet and another [stood] by us and they protected us. I saw another officer get shot in front of me."

Taylor said that a the majority of the officers who shielded her were white, and said the experience made her "admiration for police greater," while acknowledging that she always admired the efforts of law enforcement.

Officials say Micah Xavier Johnson killed five police officers and wounded seven others during the shooting Thursday night. Johnson was eventually killed when police sent a bomb-carrying robot into the building where he was holed up, after negotiations to get him to surrender failed, police said.

"Why would he do that?" Taylor said, fighting tears.

"I've never heard anything like that before," she said of the shooting. "Hundreds of rounds. There were shots all around us. I'm thankful for the police because they had no regard for their life and protected us."

Taylor said that she decided to bring her children to the protest after speaking about the police shooting deaths of two black men, Alton Sterling in Louisiana and Philando Castile in Minnesota. Throughout the press conference, she struck a balance between acknowledging the need to protest such incidents and expressing her gratitude to the police for their help in saving her life and the life of her children.

"I'm so thankful," she said, referring to the police. She said she "never stopped praying" for the safety of her four boys.

"Thank you for being heroes," she said to police today.

In one affecting moment, Taylor recalled being in the hospital, and hearing that her children had survived the shooting, only to overhear an officer tell another officer that a colleague had died.

"I saw an officer tell another officer that an officer didn't make it, and I [was] celebrating my kids," she said, stopping to hang her head and weep. "[Celebrating] my kids being alive.