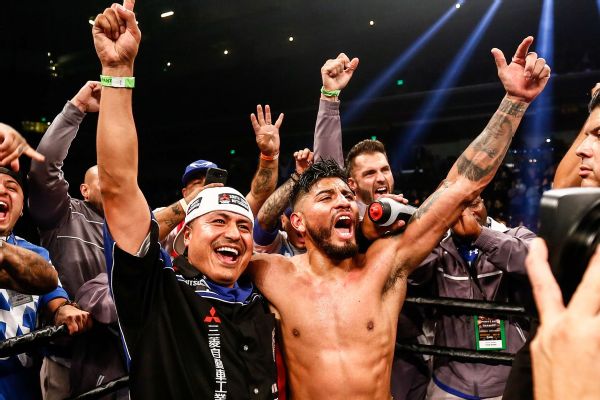 LOS ANGELES -- Abner Mares had already won three world titles in as many weight divisions, but he was solely focused on the task at hand -- winning a fourth belt and his second at featherweight.

Coming off a 16-month layoff because of two fight postponements, and with trainer Robert Garcia in his corner for the first time, Mares out-boxed the hard-charging Jesus Cuellar over the second half of their fight. Mares knocked down Cuellar in the 11th round to win a well-deserved split decision and a secondary title Saturday night at the Galen Center on the USC campus.

With most of the 5,680 spectators cheering him on, Mares rebounded from a disappointing decision loss to Leo Santa Cruz for a vacant featherweight title in August 2015.

"I never doubted myself," Mares said. "All during the layoff, I worked with Robert the entire year, and I knew I could beat Cuellar. We had a great game plan. I fought smart tonight. In the last fight, I did not fight a smart fight.

"I am so glad to be back and to be able to be called to a world champion again. People wrote me off, but I never wrote myself off. In hindsight, having the time to work with Robert proved to be effective."

Garcia was quite proud of his student.

"We spent all this time working on Cuellar because we knew even after the delay in June that it would be Cuellar as the next opponent," Garcia, who used to train Cuellar, said. "The time I had work with Abner showed tonight."

The fight was originally scheduled for June 25 in Brooklyn, New York, but was called off because Mares, who had successful surgery to repair a detached retina in his left eye in 2008, failed his pre-fight eye exam. The New York State Athletic Commission would not license him because his uncorrected vision did not meet the state's minimum standard, but he later passed the California State Athletic Commission's test, and the fight was rescheduled.

"I think Abner fought a very disciplined fight from the beginning to the end," said Ringstar Sports promoter Richard Schaefer, who put on his first card in the 2 years since he left Golden Boy Promotions as CEO after a fallout with co-founder Oscar De La Hoya. "Sometimes Abner is a bit too brave for his own good, but he showed all his skills."

They opened the fight as most expected, marching toward each other and going to battle immediately. It might not have been the best strategy for Mares against the more compact and stronger Cuellar, a southpaw, who was extremely aggressive.

There were many rough exchanges in the fan-friendly fight, but Cuellar, who was making his third title defense, appeared to get the better of Mares (30-2-1, 15 KOs), whose chin has been doubted by many since he suffered a first-round knockout loss in a big upset that cost him his featherweight world title against Jhonny Gonzalez in 2013.

But as the fight went on, Mares, 31, began to box more and slug less against the slower, one-dimensional Cuellar (28-2, 21 KOs) as the crowd chanted "Mares! Mares!" from time to time.

Even though Mares was looking to box, he got Cuellar's attention late in the ninth round, when he stopped him in his tracks with a booming overhand right and then caught him with a punch after the bell ended the round, which elicited a warning from referee Jack Reiss.

In the 11th round, out of nowhere, Mares landed a hard right hand on Cuellar's chin to knock him down as the crowd went wild.

"I shouldn't have gone down," Cuellar said through a translator. "Abner is a great boxer. It was his speed [that was the problem]. My game plan worked, but I guess it wasn't good enough. He never hurt me, and the crowd never affected me. I definitely want a rematch."

Mares punished Cuellar, 29, of Argentina, for a stretch after the knockdown, pounding him with body shots and right hands along the ropes. Reiss looked in closely, and the crowd began to chant "Mexico! Mexico!"

Mares, clearly feeling in control, played to the crowd in the final minute, raising his arm in victory and then nailing Cuellar.

"Cuellar was a little flat," said Freddie Roach, his trainer. "Abner had a good strategy. He moved and he held and it worked. Abner was a better man tonight."

It was a big win for Mares, but the fight was also a victory for Garcia, who reveled in defeating Roach, a Hall of Famer.

"People doubted Abner, and they doubted me," Garcia said. "People always said Freddie is better than me, and tonight I proved them wrong."

"I'm disappointed," Roach said. "Cuellar and I trained really well together. I didn't deliver and Garcia did, and that's the bottom line."

With the win in hand, Mares figures to be in line for major fights with other stars of the division, including titleholders Carl Frampton, Gary Russell Jr. and Lee Selby, all of whom share adviser Al Haymon. On Jan. 28, in Las Vegas, Frampton will fight Santa Cruz in a rematch of Frampton's decision win in their July 30 fight of the year candidate.

"I want the winner of the Frampton-Santa Cruz fight as soon as possible," Mares said.

If Schaefer gets his way, one of those fights will be put together soon.

"Abner is on top of the featherweight division and is ready for anyone, and there are great fights there," Schaefer said. "The rematch with Leo or the winner of Frampton-Santa Cruz II. Great fights. Imagine a fight with Gary Russell? Fantastic fight. The door is wide open."