WABC
By Eyewitness News
MIDWOOD, Brooklyn (WABC) -- Police announced an arrest Wednesday in the murder of a teenager who was fatally stabbed after school in Brooklyn Monday afternoon, and that suspect's mother is also facing charges.

Seventeen-year-old David Lopez surrendered to police Tuesday evening and is now facing charges of murder and criminal possession of a weapon in the death of 17-year-old Rohan Burke, of Fillmore Avenue in Midwood.

Authorities said Burke was in the area of East 17th Street and Avenue M just after 4 p.m. when he was attacked, and exclusive surveillance video obtained by Eyewitness News shows the moment he was stabbed.

Burke can be seen standing at the corner wearing red pants, and the suspect approaches as Burke backs into the intersection and is nearly hit by a vehicle. That's when his attacker lashes out and stabs him in the torso.
EMBED More News Videos

Burke was able to escape and ran across the street, continuing until he eventually collapsed inside a pizza shop. Workers said he was screaming for someone to call 911.

He was then rushed to Maimonides Medical Center, where he was pronounced dead.

Detectives said other video shows Lopez appearing to hand off a knife to a woman before walking away. That woman turned out to be Lopez's mother, and 38-year-old Barbara Galloza is now charged with tampering with physical evidence and hindering prosecution for allegedly disposing of the knife, which has not been located.

Defense attorney Adam Uris claimed Galloza was trying to pull him away, and that she vehemently denies taking a knife and says does not know its location.

"She was sitting in a restaurant, her son came in and said that he had been attacked by at least 4 people, she called 911 and the next thing you know she's being arrested for hindering prosecution and tampering with the evidence," said Uris.

Galloza is a mother of five who lives with her 1-year-old in a homeless shelter in the Bronx. Uris said she was in Brooklyn trying to arrange childcare because her father is dying of cancer in Manhattan.

Tracey Beckles, Burke's mother, said her son said he was heading to the park that afternoon.

"He said, 'I'll be back, I love you,' like we always do," she said. "You took someone's child nephew, someone's grandson, took away a part of our hearts."

"You just see the blood on the floor, it's horrifying," witness James McCollum said. "You can't see that and act like it's normal. He was very panicked, like something really happened, like something bad to his body. Like your life was basically on the line type of screaming."

Burke was a student at the Lafayette Educational Complex, which houses five different schools, in Gravesend.

Police are also looking for a second teen who was seen in the video and might have been involved.

Prosecutors say Lopez has a history of violence and has been arrested twice within the past seven months.

Police say he stabbed a man in September and allegedly robbed an elderly woman in February. 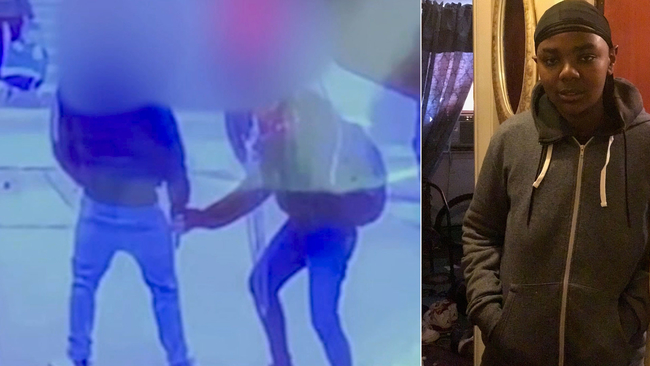