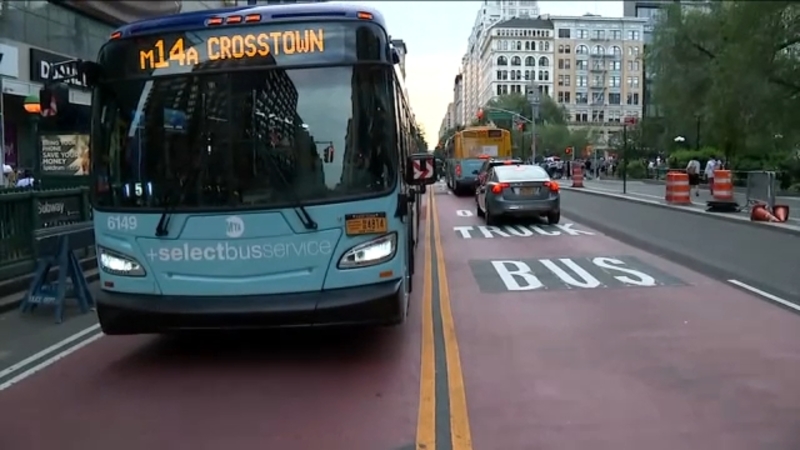 The half-mile stretch between Broadway and Wadsworth Avenue covers one of the busiest and most congested corridors in Manhattan, with 66,000 daily riders, resulting in average bus speeds of less than 4 miles per hour.

According to the Department of Transportation, the launch of the Flushing-Main Street Busway in Queens two months ago increased speeds in the northbound direction an average of 15%-24% during the day and 13%- 31% during the PM peak.

"Washington Heights deserves faster, safer, more reliable bus transit," Mayor Bill de Blasio said. "The 181st Street busway will help this iconic neighborhood come back stronger than ever. Busways have transformed transportation across the city, most recently in Flushing, where the new busway has dramatically increased speeds in just two months, and I look forward to bringing these changes to even more neighborhoods citywide."

Officials say slow bus speeds on the route create unreliable service for riders making connections to the A and 1 trains, any of the six MTA bus routes traveling on the north-south avenues, and the Port Authority's George Washington Bridge bus terminal.

The project aims to increase bus speed and reliability, calm traffic, and improve truck travel and loading and unloading, while maintaining local access to support businesses and services.

"We have seen across this city the benefits of faster, more reliable bus service, and the early success of the Flushing-Main Street busway is just the latest example," Deputy Mayor for Operations Laura Anglin said. "Washington Heights is up next in our continued expansion of busways, and we are looking forward to the positive impact this project will have on the more than 60,000 daily riders."

Through traffic would be limited to buses, trucks, and emergency vehicles, while cars, taxis, and vans must make next available right turn off busway. Local access and parking are allowed, with improved truck loading and parking meter regulations.

The NYPD will provide traffic enforcement and inform motorists about the new regulations with the launch of the busway. DOT will also install bus lane cameras, which for the first 60 days will issue warning letters to registered vehicle owners who violate the new regulations, before beginning to mail out violations with fines.

"The key to an effective bus system is well-enforced bus priority," said Craig Cipriano, President of the MTA Bus Company and Senior Vice President for Buses, MTA New York City Transit. "We're thrilled that the Main Street Busway is improving commutes for thousands of customers with up to 31% speed increases, and are excited to bring improvements to our customers on 181st Street and in other parts of the city."