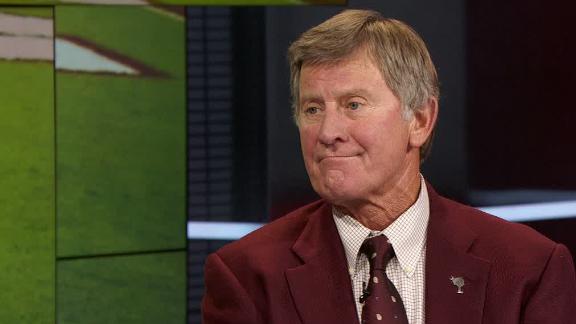 South Carolina coach Steve Spurrier calls this "talking season," and he had plenty to say Tuesday during his visit to ESPN.

It didn't take long for the comments of Clemson coach Dabo Swinney to surface. On Monday, Swinney joked that he and Spurrier were from different planets and that Spurrier was from Pluto and Swinney from Mars.

Spurrier, perhaps reading up on his science journals, cracked back, "Dabo probably thinks there's only, what, nine planets out there. I think I read where Pluto may not be considered one now."

The Clemson-South Carolina rivalry has been spiced up considerably in recent years with some of the verbal volleys between Spurrier and Swinney. But Spurrier wants to make sure everybody knows that he's not the only one doing the volleying.

"The only thing I remind Dabo of is his comments three years ago of the real Carolina being in Chapel Hill and the real USC being in California," said Spurrier, whose Gamecocks have won five in a row over the Tigers. "Sometimes he forgets he throws some stuff out there also. He wants to make people believe that I'm the only one that throws a little stuff out there."

The Head Ball Coach didn't stop there, either. He was just getting started.

Asked about Swinney's comments last season that Clemson was the first team from South Carolina to win a BCS bowl after the Tigers' win over Ohio State in the Orange Bowl, Spurrier cited South Carolina's success in the rivalry and the relative depth of the SEC.

"We've never even been to [a BCS bowl]," Spurrier said. "I'll admit to that, although we beat them about every year. They get there and we don't. That's just the way it is. The SEC can only send two teams and the ACC sends two. We've got too many good teams going.

"That's just the way it's worked out. He's correct. But would you call the Orange Bowl a BCS bowl? They won the national championship there in 1981. I asked Danny [Ford, Clemson's former coach], 'Have they completely forgotten about you and your team in '81?' He said, 'I think they have.'"

As has become custom, Spurrier hopped a ride on the Florida plane to ESPN with Gators coach Will Muschamp and didn't bring a sports information director with him.

Asked if he would ride with Swinney to such an event, Spurrier said, "Absolutely."

"We get along fine," Spurrier said. "We really do. Our wives are wonderful friends and are involved in a charity together. It's just a bunch of talking. That's all it is."