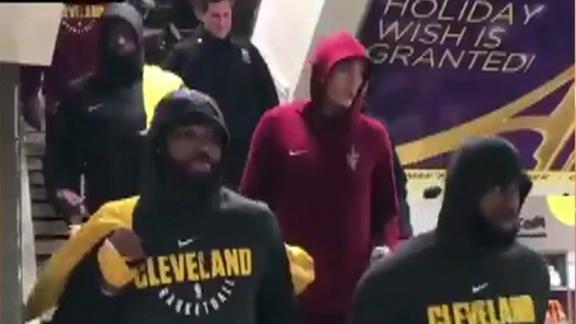 ESPN
By Ian Begley
The Cleveland Cavaliers decided to get the full New York City experience on Monday. Shortly after their shootaround at Madison Square Garden, members of the team went to the subway station below the Garden to take the train back to the hotel.

The experience was documented by the NBA and by LeBron James' media company, Uninterrupted.

The team was staying at a hotel near the arena but decided to take the subway back to the hotel due to traffic delays. "We had two options," Kyle Korver said on James' video. "A 45-minute bus ride or a six-minute train ride."

A subway rider sitting next to James was visibly uncomfortable being filmed by the three-time NBA champ. "Can you not?" the rider said as the camera panned on him before leaving his seat.

As the Cavs were walking through Penn Station to the underground subway, one passerby said, "KP gonna get y'all tonight" as he walked by James and his teammates. James and the Cavs play Kristaps Porzingis the Knicks on Monday night.

Over the weekend, James caused a bit of a firestorm in New York when he said the Knicks should have drafted Mavericks guard Dennis Smith Jr. The Knicks took umbrage to the remarks on Sunday, perceiving them as a shot at Knicks rookie Frank Ntilikina, who was selected one spot ahead of Smith.

James clarified those remarks on Monday, saying he didn't mean to "shade" Ntilikina, but instead meant it as a shot at ex-Knicks team president Phil Jackson.

The Metropolitan Transit Authority, an entity that runs New York City's subway system, had a little fun with James and the Cavs on its social media account: 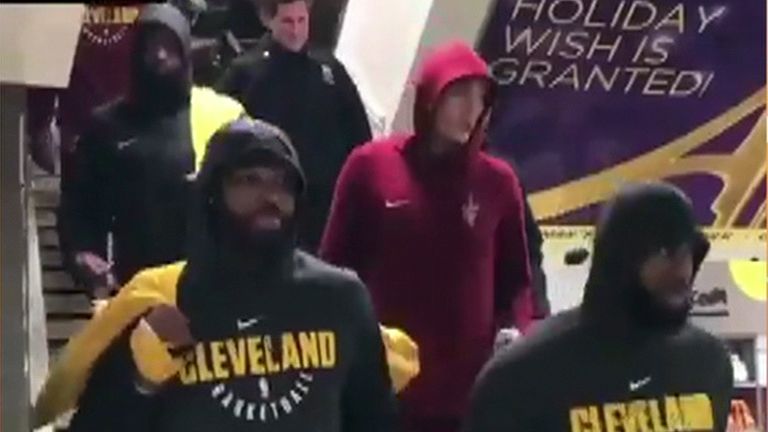 Cavs ride the subway in NYC
While the Cavaliers are in New York for their game against the Knicks, they opt to take the subway for easy travel.
Report a correction or typo
Related topics:
sportsespnknickssubwaycavscleveland cavaliersnew york knicksnew york citynycnbalebron james
Copyright © 2020 ESPN Internet Ventures. All rights reserved.
More Videos
From CNN Newsource affiliates
TOP STORIES