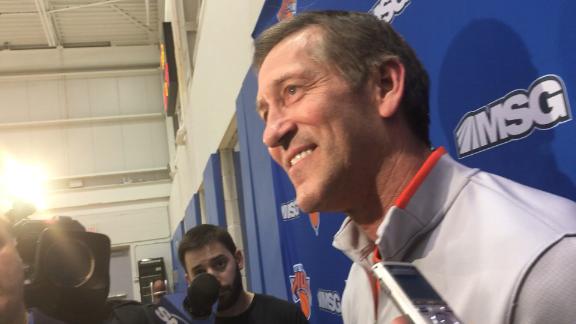 GREENBURGH, N.Y. -- New York Knicks coach Jeff Hornacek strongly indicated Tuesday that exiled center Joakim Noah will not be back with the team.

"We've moved on. He's ready to move on and maybe have an opportunity somewhere else," Hornacek said following the Knicks' first practice after the All-Star break.

Noah and the Knicks have mutually agreed that the veteran forward be away from the team indefinitely following a heated argument between him and the coach at practice in late January.

Hornacek said Tuesday that the plan is for Noah to remain away for the foreseeable future. He wasn't sure if Noah would return before the end of the season, noting that the decision would come from team president Steve Mills and general manager Scott Perry.

The Knicks attempted to deal Noah prior to the trade deadline earlier this month but could not find a team willing to take on the $54 million he is owed over the remainder of his contract, which runs through the 2019-20 season.

New York, according to sources, has shown no desire to waive Noah. As of late last week, he hadn't been open to any buyout discussions, sources said.

Hornacek said several times Tuesday that the team has moved on from the Noah situation.

"That's something that happened three weeks ago, four weeks ago. We handled that thing with Jo," he said. "It's not finalized because he's still on the roster. We've dealt with that situation. There's really nothing more to say about it."

Before the Knicks jettisoned him, Noah and Hornacek had to be separated during a West Coast practice session in late January, league sources told ESPN's Adrian Wojnarowski. Noah had become vociferous toward Hornacek in the aftermath of a brief appearance in a Jan. 23 game and engaged the coach verbally in practice the next day.

Sources have described the confrontation as "heated," noting the need for others in the practice gym to get between them during the argument. Noah left the team following the confrontation. The team initially said he exited for personal reasons and later said they mutually agreed that the veteran center would not return to the team until further notice.

Asked Tuesday if his run-in with Noah in late January would prevent the 33-year-old from returning to the team, Hornacek said, "No."

"Things happen in practice, happen in meetings, happen in all kind of stuff," he said. "We've dealt with that and that's the end of it from us."

The National Basketball Players Association has said that it is "closely monitoring" the situation between Noah and the Knicks to ensure the player "is treated fairly under the rules of our collective bargaining agreement."

If the Knicks choose to waive Noah using the stretch provision, the franchise would owe him $7.5 million over five seasons, as opposed to $18.5 million in 2018-19 and $19.3 million in the final year of his contract. Stretching Noah's contract would cut into New York's cap space in summers in which the organization is hopeful of landing top free agents.

Hornacek says Knicks have 'moved on' from Noah
Knicks head coach Jeff Hornacek says the plan is for New York not to bring back Joakim Noah and thinks that Noah could "have an opportunity somewhere else."
Report a correction or typo
Related topics:
sportsespnjoakim noahnyknew york knicksnbajeff hornacek
Copyright © 2020 ESPN Internet Ventures. All rights reserved.
More Videos
From CNN Newsource affiliates
TOP STORIES