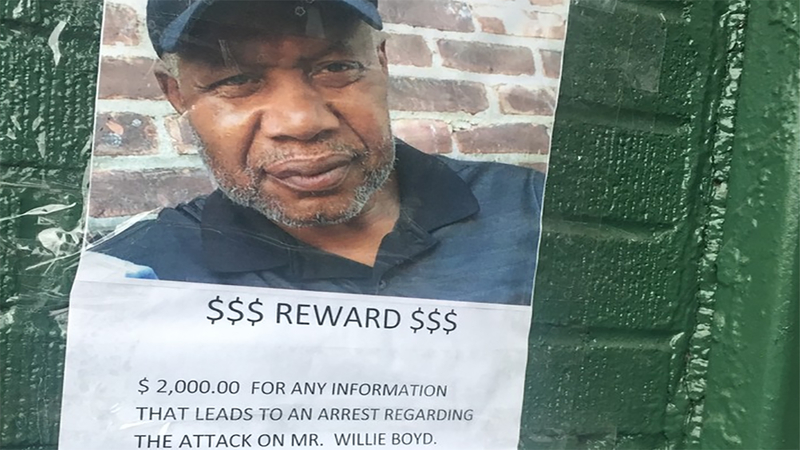 PARKCHESTER, Bronx (WABC) -- Police in the Bronx are searching for the group of men who savagely beat a 73-year-old man so badly that he's now fighting for his life in a hospital.

Willie Boyd, a Vietnam veteran, was viciously attacked by who police believe were five men after they broke into his apartment early last Tuesday morning. "I can't believe I'm doing this," said Vilmaris Hodge, his daughter as she fought back tears while placing posters around the neighborhood. They are offering a $2,000 reward for information that would lead to arrests in the case.

"He is a good man. He didn't deserve this and I need justice to be served. Whoever did this has to pay and I'm praying that anybody out there with any type of information to please reach out to us," said Vilmaris.

Standing in Willie Boyd's apartment in the Parkchester section, Vilmaris and her brother William can't believe that five men would bust through the front door and attack their father. Portions of the damaged door were ripped from the walls. "My father was found unconscious in the lobby in front of the neighbor's door. If it wasn't for his neighbor my father probably would have been dead," said William.

Willie had an altercation with a man late Tuesday night over money owed and called police. Later, after they took a report and left, around 12:45 early Wednesday police believe five males busted down his door and viciously beat him. He was discovered in the hallway by his neighbor.

Willie's children, there are five of them, say their father is a good man. A Vietnam veteran. A family man who always spends time with them. Matthew, like his father, went into the Army. "My father served. I want to make this my career. I want to not give up on it," he says. So I asked if he had a good bit of influence on him? "You could say that. Yes he did sir," he says.

Now they feel helpless as their father struggles for life. Fighting back her tears Vilmaris pleads, "Our family is in a lot of pain. Nobody deserves this. No one. Please help us."

William says, "Whoever did this took what little time I would have left with him."