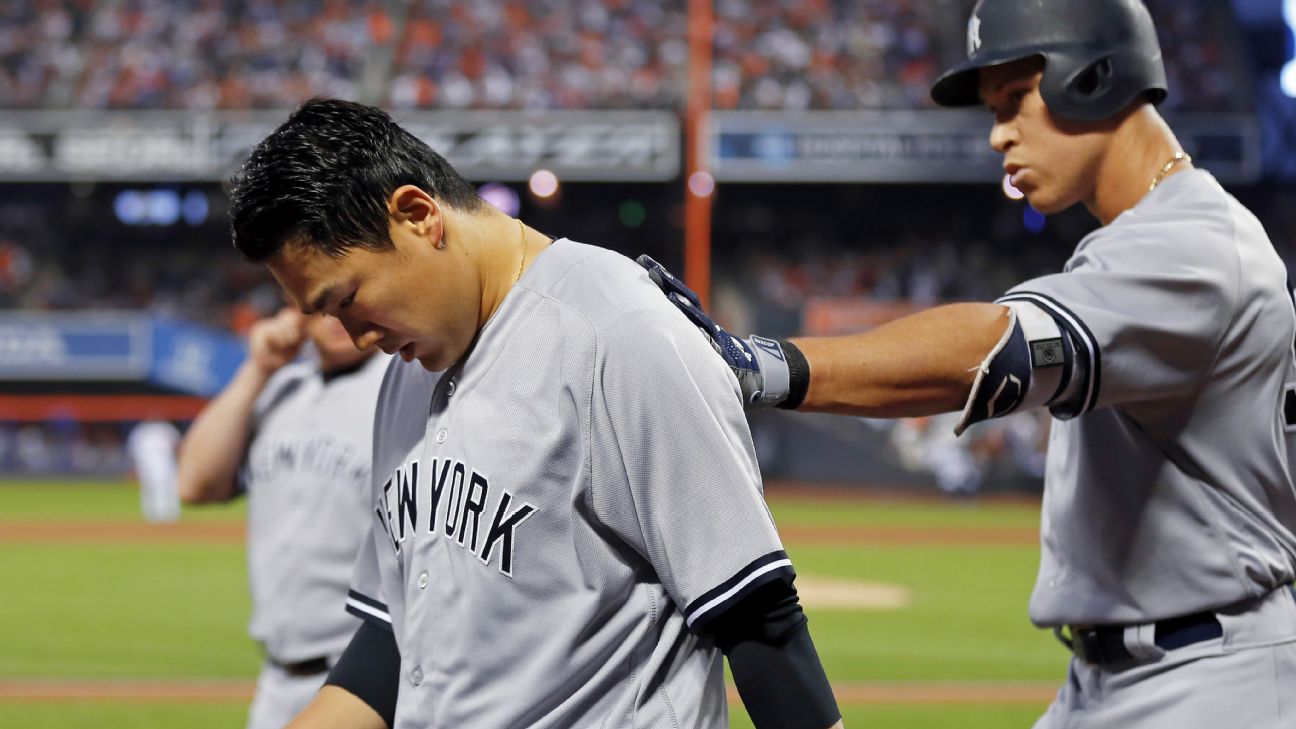 NEW YORK -- Yet again, National League rules have left the New York Yankees with a freak injury to one of their pitchers.

For the second time in four seasons, Yankees right-hander Masahiro Tanaka was hurt in a game while running the bases. He left Friday night's Subway Series opener at the rival New York Mets' Citi Field early after experiencing what the Yankees said was tightness in both hamstrings.

He will be re-evaluated by trainers Saturday.

"Not sure of the severity of it, really, whether it's cramps or whatever," Yankees manager Aaron Boone said. "We got an IV in him right when he came out of the game."

While Boone waits to see what Saturday's tests reveal, he's hopeful Tanaka won't be forced to miss his next start. The manager also knows it's entirely possible the injury could make that happen. Boone said he "wouldn't be surprised either way."

Tanaka also was hurt during a September 2015 start at Citi Field when he was attempting to beat out a ground ball. He suffered a strain to one of his hamstrings and ended up missing a start.

In addition, outfielder Aaron Judge says his left thumb, which he jammed on a slide into second base in the first inning against the Mets, is a little sore. To keep the swelling down, it was taped. Trainers will run tests on Judge before he comes to Saturday's game.

Friday's injury to the Yankees ace came in the top of the sixth inning. Tanaka, who reached base due to an error by Mets first baseman Adrian Gonzalez, was on third when Judge came up with the bases loaded and one out.

When Judge lofted a fly ball to right field, Yankees third-base coach Phil Nevin got Tanaka positioned back on the third-base bag, tagging up. As soon as Mets right fielder Jay Bruce made the fly ball catch, Tanaka was sent home.

"It was shallow, so I wasn't sure if I was going to go or not," Tanaka said through an interpreter. "But our third-base coach kind of shouted, 'Tag up!' So that's what I did."

As Tanaka sprinted, Bruce's throw was a little wide of home, causing catcher Devin Mesoraco to vacate the plate just long enough for Tanaka to score without sliding for his first major league run.

As he walked back to the Yankees' dugout, Tanaka eased in gingerly. A half-inning later, he was replaced in the field by reliever Jonathan Holder.

Boone said he had no issue with Tanaka getting sent home for the score.

"You take who the person is [running] into account an any play, but at the end of the day, you're kind of banking on the guy running and his speed and strength of the arm and how many outs, all those things go into the pot," Boone said. "Obviously, you're a little more conservative because we're not going to have our pitchers stealing and things like that.

"But as far as him being out there, no, we know the speed and the situation, and you play accordingly."

The injury derailed what had been a strong night for Tanaka on the mound. He lasted five innings, allowing just one run and one hit -- a leadoff home run to Brandon Nimmo. Tanaka also struck out eight batters.

"He was great," Boone said. "His splitter was really, really strong. He was cruising. He was really dealing there for a while."

Six of Tanaka's eight strikeouts came on splitters. That tied for the most splitter-induced strikeouts of his season. He also had six in his April 5 start against Baltimore.

Along with Tanaka's now two hamstring injuries in starts at Citi Field, the Yankees lost starter Chien-Ming Wang to a serious foot injury in June 2008, when he partially tore a tendon and sprained his right foot running the bases during a Yankees interleague win at Houston.

Right after Wang's injury, Yankees co-chairman Hank Steinbrenner blasted the NL for continuing to use rules that require pitchers to hit.