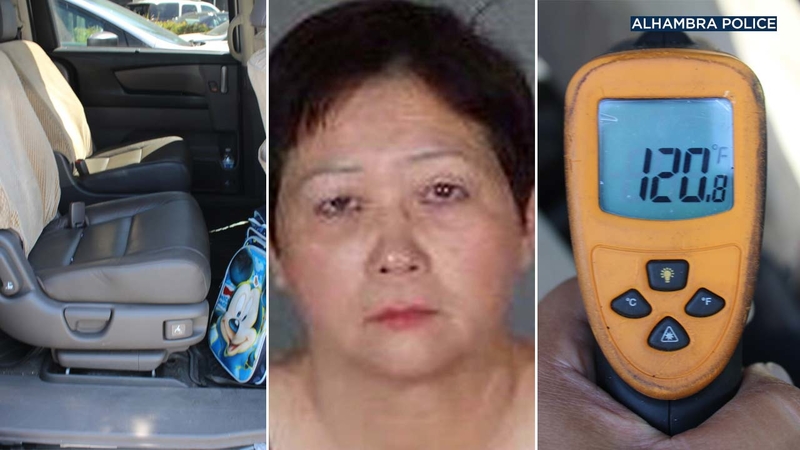 ALHAMBRA, Calif. -- A 6-year-old boy was found locked in a hot car in California, sweating profusely and crying. Police said the temperature inside the vehicle was 120 degrees.

Alhambra police received a call from a passerby Tuesday around 2:20 p.m. telling them about a small child locked inside a car with the windows rolled up in the 700 block of East Valley Boulevard in Alhambra.

Responding officers found the little boy inside the vehicle, sweating and in tears. Officers were able to get the car open and render aid to the child. A temperature reading was conducted, and the interior of the car was shown to be 120 degrees, authorities said.

The Alhambra Fire Department was called to the scene, and the child was transported to a nearby hospital for treatment and evaluation.

While police officers were investigating the whereabouts of the boy's parents, they came into contact with Helen Law, who claimed she was the child's babysitter.

Authorities learned that Law, 60, had left the boy in the car while she ran errands and ate at a nearby restaurant. Officers learned that the boy had been locked inside the sweltering vehicle for approximately two hours.

Police arrested Law on suspicion of felony child endangerment and transported her to the Alhambra Police Department for booking. Her bail was set at $100,000. She is scheduled to appear in court on Thursday.