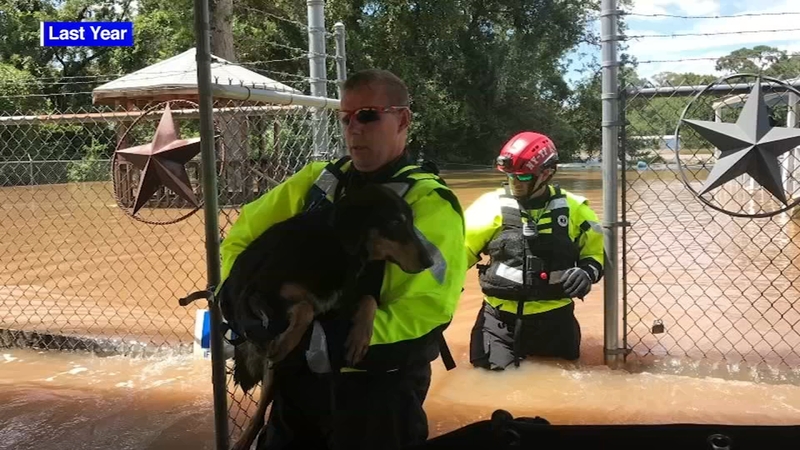 WILLIAMSBURG, Brooklyn (WABC) -- Members of the NYPD, FDNY and New York City Office of Emergency Management who make up FEMA's Urban Search and Rescue New York Task Force 1 deployed to North Carolina Tuesday morning, on the morning when many would have been at September 11th memorial services.

Eighty-two members and six canines mobilized at the Office of Emergency Management's Brooklyn facility before deploying to Kinston, North Carolina, where they will assist with Hurricane Florence.

"My daughter asked me, 'Dad why do you want to go to a hurricane when everyone is leaving it," NYPD Deputy Team Leader Thomas Traynor said. "And I said, 'You know, we're trained for it. We need to go down and help anybody who needs our help."

The leader of the team is Battalion Chief Joe Downey, whose father, FDNY Chief Ray Downey, was killed on 9/11. The younger Downey was supposed to attend the remembrance ceremony at the World Trade Center site, where his wife was reading some of the names.
EMBED More News Videos

Lauren Glassberg reports on the task force on its way to help with Hurricane Florence.

"It's a tough day for the team, but all of us believe we have to do what's right," he said. "He wasn't the only one from this team who was lost. We lost about 40 something guys...So in their remembrance, I think it's important we carry on their legacy. It is a tough day, but it's symbolic of what we do here in this city."

The group is fully self-sufficient and is made up of firefighters and EMS, along with NYPD Emergency Services Unit, communications officers and K-9s.

Last September, members of the city's USAR team were in Puerto Rico and Texas to assist in rescues during hurricanes Harvey, Irma and Maria, as well as Hurricane Matthew the year before that.

In 2010, Urban Search and Rescue New York Task Force 1 joined with rescuers from around the world to make numerous rescues from collapsed buildings in Haiti. Among the team's rescues were a 5-year-old boy named Kiki who was pulled from his collapsed Port-au-Prince home after he was trapped for a week.