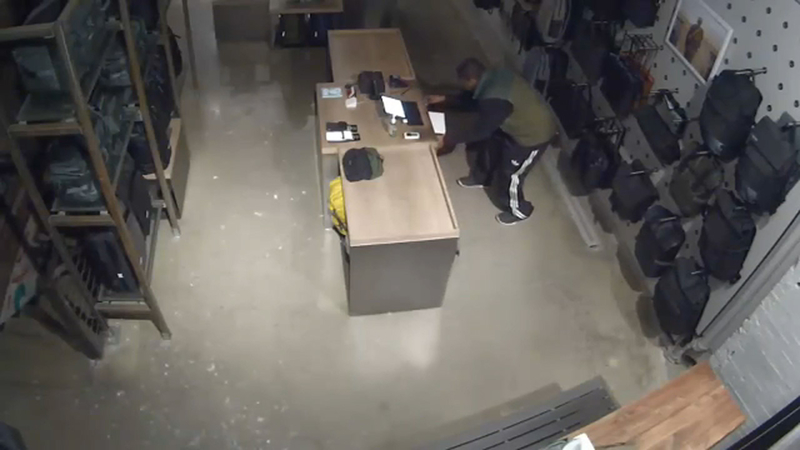 LOWER MANHATTAN, New York City (WABC) -- Police are looking for a robber who has used a rock or a brick to break into four stores in Manhattan a total of six times, and they're hoping surveillance video will lead to an arrest.

Investigators released video showing the suspect throwing an object through the rear glass door of a Timbuk2 on Lafayette Street in SoHo around 3 a.m. on Saturday, October 13. Once inside, the suspect made of with $300.

Police are looking for this man, who they say has robbed four stores a total of six times

"They just see what the store sells, break the window, quick smash and grab," NYPD Chief of Detectives Dermot Shea said. "It doesn't seem to be a pattern."

The crime spree began just after 2:30 a.m. on September 28, when authorities say the suspect used a rock to shatter the glass door of Blue and Cream on East 1st Street. He reportedly stole numerious articles of clothing and $140 in cash.

Authorities believe he is also responsible for two similar incidents at The Mobile Spa on East Houston and one at Pressed Juice on Lafayette Street. In those three incidents, he (and accomplices in once case) made off with 50 headphones, 54 cell phone cases, $5,400 in cash, an ebike, 10 cell phones, 16 speakers, 15 portable charges, 10 selfie sticks a cash drawer and an Apple iPad.

"We have expensive headphones and stuff like that," Mobile Spa manager John Fennell said. "It could have been cased also. Maybe they came in and looked at what we had and came back at a later period. That's possible too."

"This is what they do," Shea said. "So we are comparing known people that do this in the past to some of the information we have."

Back on Broadway! Great White Way gets date to restart shows