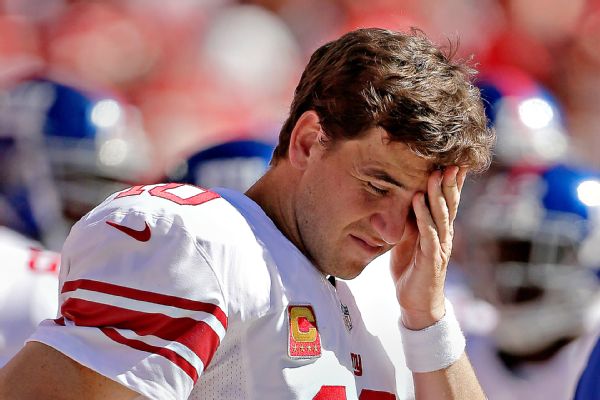 Shurmur also said Tuesday that he will not suspend backup quarterback Kyle Lauletta for his arrest last week.Lauletta was back at practice Tuesday with his teammates and will face "internal consequences" for his actions.

The Giants are 1-7 and there appeared to be questions about who would be their quarterback in the second half of the season. Before the team's bye week, Shurmur had said, "We'll see," when asked whether Manning would keep his starting job.

Shurmur said he had multiple discussions with Manning over the weekend.

"I also explained to Eli that everybody needs to play better and, as we go through this, it's important we're not almost in these games," Shurmur said. "We do what we have to do to get it over the top and win football games."

Shurmur felt the need to have that conversation with Manning "because it's the quarterback."

The first-year Giants coach presented the same message to the team during a morning meeting. They are averaging 18.8 points per game, which ranks 27th in the NFL.

Manning has been sacked a league-high 31 times. He has thrown just eight touchdown passes in eight games and wasn't given any vote of confidence beyond Monday night.

"I told him he's starting Monday," Shurmur said. "You guys roll with it how you want with the idea that he's going to get us on a run here. There will be no decision to make. Part of the conversation was, 'We trust you, we want to work with you and we trust the fact that you're going to get in there and help us win football games.'"

Lauletta apologized to the Giants, fans and his family for his actions last week. He was charged with "various motor vehicle and related disorderly persons offenses" pertaining to a traffic violation in Weehawken, New Jersey, last Tuesday.

Lauletta was trying to make a right turn from the wrong lane in his Jaguar to get to Route 495 West, according to a statement by the Weehawken Police Department. He was told to keep going straight, but Lauletta almost struck an officer while making the illegal turn and then "refused various instructions" after he was stopped by another officer at the end of the on-ramp.

Police also said the same car owned by Lauletta was involved in a "similar incident" at the same location the previous day, and a summons was issued by mail after the car had not stopped and left the scene.

"The incident that happened last week is a terrible representation of who I am and what I stand for," Lauletta said. "I do recognize that those cops have a very difficult job, an important job at that. I've seen that intersection when there are no officers and it's very chaotic. I respect those guys and can't say I'm sorry enough about what happened. All I can do now is move forward and try to prove myself with my actions and my work ethic."

The rookie declined to discuss details of what occurred but admitted to being in the wrong.

In addition to the legal charges, it may have pushed back the timeline for Lauletta to get on the field.

"Disappointed because, especially with a quarterback, you're looking at decision-making in all facets of a player's life," Shurmur said.

He later added: "The way I look at it, quarterbacks should be early" instead of rushing to get to the practice facility.

Lauletta was a fourth-round pick earlier this year out of Richmond. He has yet to suit up for a regular-season game.