If that's it for Eli Manning in New York, he still leaves a legend 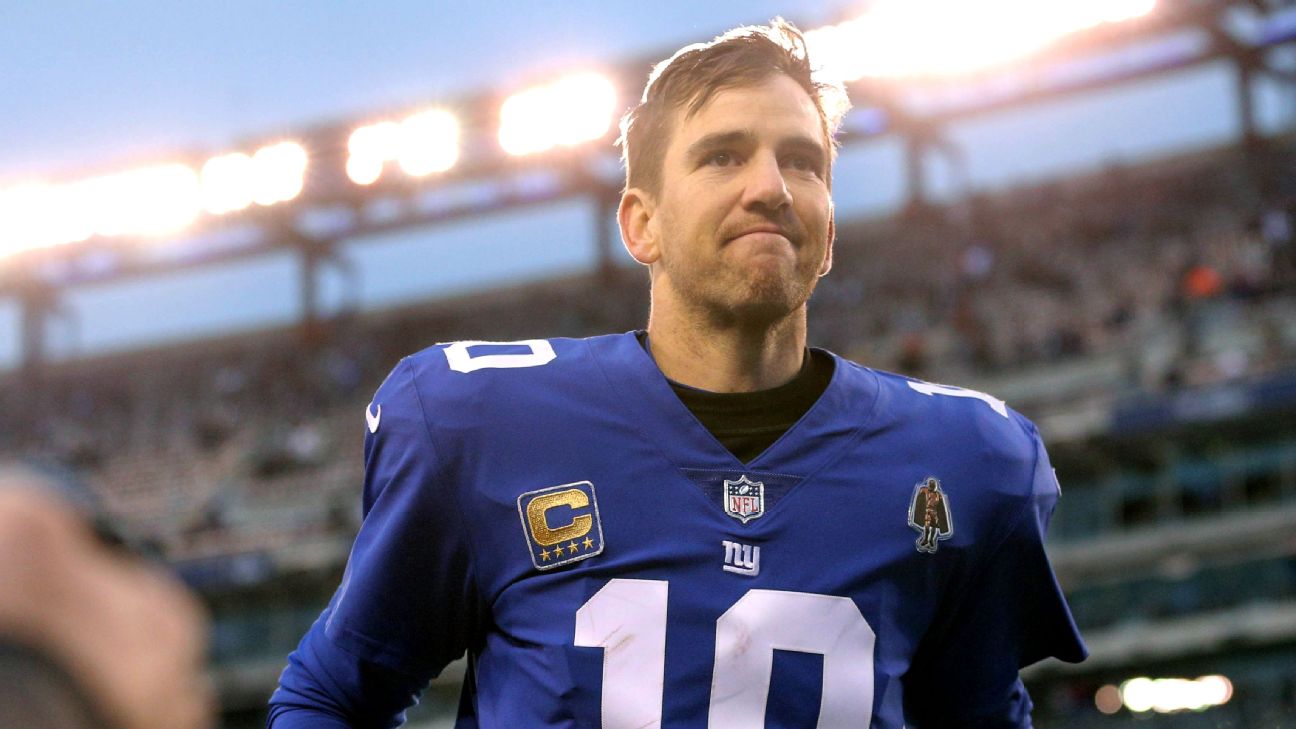 ESPN
By Ian O'Connor
EAST RUTHERFORD, N.J. -- At the end of a cold winter's day in the Jersey swamps, in a stadium overtaken by Dallas Cowboys fans, pockets of New York Giants faithful rose above the din and chanted Eli Manning's name. They were trying to inspire their quarterback to deliver one more winning drive -- and perhaps one last memory for the road.

Needing a mere 15 yards to move into field goal range with 72 seconds to play and Dallas holding a 36-35 lead, Manning responded to the moment by throwing four consecutive incompletions and sending the Cowboys into the playoffs on a bit of an artificial high. They had just beaten a lousy team, after all, a team that has managed four seasons of six or fewer victories over the past five years.

A 5-11 team that looks nothing like the two that Manning led to Super Bowl titles on Tom Coughlin's watch.

"If Eli is done playing," his father, Archie, said by phone afterward, "I'm fine with it. But if he comes back, the Giants have got to win. They can't go through another season like this."

No, they cannot. The Giants need to make dramatic changes, and when a football team needs to make dramatic changes, the quarterback position is often the best place to start. Eli Manning knows this. For the first time, he brought his three daughters onto the field before a game, all of them dressed in their father's No. 10, and took some family pictures in the end zone. The quarterback declined to attach any big-picture significance to the scene.

"Ever hear the phrase, 'A happy wife, a happy life?'" Manning said of his spouse, Abby, who is pregnant with their fourth child, a son. "I think that fits that category."

But Manning couldn't aw-shucks his way through this one. Common sense says this was the Manning way of playing a little prevent defense, of making sure he left MetLife Stadium with something special just in case this was the last time he would enter the building as an active Giant.

Should Manning, who turns 38 on Thursday, lose his job this offseason? Just about everyone paying attention has already weighed in on that, this columnist included, but Sunday wasn't the day to rewrite Manning's obituary or to debate whether he was worthy of returning to the same backfield with Saquon Barkley, who made like an airborne, in-his-prime Michael Jordan on a surreal touchdown that punctuated his record-breaking first year. There will be plenty more opportunities for that.

Sunday was a day to appreciate what Manning has meant to the Giants, and to New York, ever since Derek Jeter called Manning during his rookie-year struggles in 2004 to tell him to keep his head up and to keep carrying himself with the poise he already had showed. Manning listened to Jeter, whom he described as a role model, and became a study in dignity and grace. Manning also listened to his old man.

When Eli first arrived in the Meadowlands, Archie told his youngest of three boys that he shouldn't try to be like big brother Peyton, already an established superstar with theIndianapolis Colts. "Be like Phil Simms, not Peyton Manning," the father said. Just like he didn't want Eli to enter college thinking he had to match his father's career at Ole Miss -- or what Peyton had accomplished in a much stronger program at Tennessee -- Archie didn't want Eli to start his NFL career suffocated by the weight of expectation. He thought Simms, the proud Giant, was a more reasonable target.

"Phil was a mighty good player," Archie said. "He was dependable, accountable, a tough quarterback, and the Giants won a championship with him. Be like him."

Eli turned out to be better than Simms.

"And I wish my dad had been around to see it," Archie said.

Buddy Manning took his own life in the summer of 1969, while his son was still playing at Ole Miss. Buddy had loved anyone and anything from the Magnolia State, and so he adored Giants quarterback Charlie Conerly, born and raised in the Mississippi Delta about a half hour's drive from the Manning home in Drew. Buddy's affection for the Giants was passed down to Archie, and then to Eli, who proudly owns Conerly memorabilia and Conerly's old job.

Eli's family members and friends tease him about how he has become a card-carrying Jersey Guy and about how hard it is to get him to return for even a week or two to the South. The job Eli has is the only job he has ever wanted, which explains the no-trade clause in his deal and the tears he cried last year when coachBen McAdoo effectively benched him. Eli doesn't want to experience the heartbreak Peyton experienced when fired by the Colts and forced to find work inDenver.

Archie said that he hasn't had a single conversation with Eli about next season and that, to his knowledge, the team hadn't discussed its 2019 plans with his son as of Sunday afternoon. Archie said the season-long noise surrounding Eli's status did nothing to rattle the quarterback's focus.

"I haven't heard him bad-mouth one writer or TV guy," Archie said. "Eli doesn't go high and he doesn't go low. He goes week to week."

Now, Eli is all out of weeks in the 2018 season, his 15th in the league. Some people in the Giants' organization believe Manning would choose to retire if the team surprises most observers and releases him.

"It's hard to leave football," Archie said. "It's hard for players to really look at themselves and say, 'I need to retire.' At the same time, there's some value in walking away from the game healthy and playing your entire career in one place. Peyton doesn't regret his decision [to play with the Broncos], but there's a little something in there that he wishes he could've done it all in one uniform."

And yet Archie made it clear that he believes Eli can play winning football, postseason football, if the Giants bring him back.

"I haven't seen any decline in his arm strength," Archie said, "and he never did run fast. Eli understands the game. He knows how to run a football team, and he's still physically capable of playing at a high level. That's just the way I feel, and of course I'm his father. But I know this: If Eli felt like he couldn't do it anymore, he would quit. I know he would."

It never ends perfectly in New York -- or anywhere else, for that matter. Nearly a quarter century ago, coming off an 11-5 season, a 38-year-old Simms thought he was being summoned into Dan Reeves' office to sign footballs for charity before the Giants coach fired him on the spot. Don Mattingly was pushed into retirement by George Steinbrenner, and a bitter Patrick Ewing was traded by the Knicks. Jeter engaged management in a bloody contract negotiations and, in his last season, fought off calls that he should be dropped to the bottom of the order before delivering his near-miraculous walk-off single in his last Yankee Stadium at-bat.

Actually, Yankees owner Hal Steinbrenner protected a 40-year-old Jeter in that final season, 2014, by making it clear to general manager Brian Cashman and manager Joe Girardi that he didn't want the captain embarrassed (demoted or benched) during his farewell tour.

Will Giants president and co-owner John Mara protect Manning this offseason and quiet the doubters within his facility walls? Or will Mara demand change at the most important position in the sport and force out Manning, like he forced out Coughlin three years ago?

Mara angrily declined comment Sunday as he stormed toward the losers' locker room. This much is clear: Manning's permanent replacement isn't in the building. If the Giants decide to move on from Manning in the spring, it will be through free agency (Nick Foles, Teddy Bridgewater) and/or through the draft (Ohio State's Dwayne Haskins).

Giants coach Pat Shurmur said he "absolutely" expects Manning to return, though he conceded that he has bosses and that sometimes bosses have other ideas. Archie said his gut feeling is that Shurmur genuinely wants his son to play in 2019 -- and that Eli wants the same thing.

Eli Manning maintained that he wasn't thinking of the possible endgame when he faced Dallas and that he didn't hear the fans who were chanting for him on that final possession. Asked why he felt his 15-year marriage with the market had been a good one, Manning said, "I don't know. I think I have put all I could into it, playing quarterback for the Giants. I have tried my best to go out there every day and compete. That is all you can ask for from yourself."

When it was all over Sunday, Manning offered a quick wave to the fans as he headed through the tunnel, fist-bumped a locker room security guard and then disappeared behind the door. No, this wasn't a day to scream for Manning's job. This was a day to thank him for the memories, just in case the Giants decide in the coming months that he's too old to make any more.

Latimer pulls in pair of crazy catches.
Cody Latimer brings in two crazy catches for the Giants including a one-handed touchdown in a loss to Dallas.