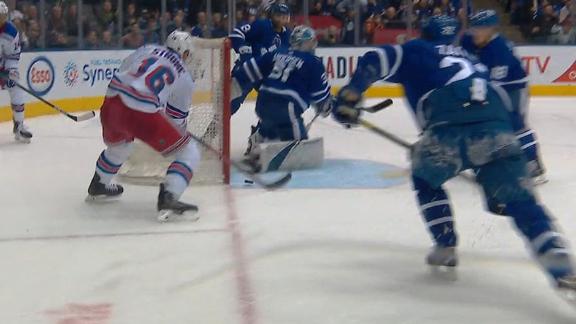 TORONTO -- The New York Rangers were glad to finally get another win.

Pavel Buchnevich also scored for the Rangers and Alexandar Georgiev finished with 44 saves as the Rangers won fur just the second time in 13 games (2-6-5).

"Obviously our goalie was huge but we did a lot of good things too," Rangers coach David Quinn said. "It's one of the most dangerous teams in the league and I thought we did a real good job in a lot of areas and finally won an overtime game,"

The Rangers lost the last five times -- and 10 of the last 11 -- when the game went beyond regulation.

On the winning goal, Andersen had just made an amazing save on Boo Nieves on a 2-on-1 but the puck went to Strome who stuffed it in from the left side of the net to give the Rangers their second win in 13 games (2-6-5).

With Boston beating Florida 7-3, Toronto fell seven points behind the second-place Bruins in the Atlantic Division.

Added Hyman: "It just wasn't going in. Give credit to their goalie, he played great. I thought (Andersen) played great as well."

Buchnevich ended a scoreless deadlock 19 seconds into the third, beating Hyman to the puck in a mass of bodies in front of Andersen after Brady Skjei's shot from a bad angle produced a fat rebound. It was Buchnevich's 18th goal of the season.

The Maple Leafs tied it 8:33 after a rush by Morgan Rielly opened up the Rangers' defense and John Tavares fed Hyman for his 19th into a wide-open net. It was Toronto's 33rd shot on the night.

That was all the Maple Leafs could get against Georgiev, a second-year Bulgarian who had a career-high 55 saves in New York's 4-1 win against Toronto in New York on Feb. 10.

"I have big respect for that team, obviously one of the top in the league," Georgiev said. "You know that you have to bring your best game to be able to (defeat) those guys."

Toronto center Auston Matthews took 16 shots but only four got to Georgiev. Another four were blocked and eight missed the target.

Tavares was hurt later in the third, sent flying by a cross-check from Rangers defenseman Marc Staal in front of Georgiev. The star center skated off slowly, hunched in pain after finally being helped to his feet. Staal was penalized on the play. Tavares returned for the power play, almost scoring.

Toronto was coming off a 4-2 win Wednesday in Buffalo but lost for the sixth time in nine games (3-4-2).

Georgiev was busy from the get-go, forced to stop a dangerous wrist shot from Auston Matthews on the Maple Leafs' first shot. Toronto outshot New York 6-1 to start.

The Rangers began to fight back, tying the shot count at 7-7. Matthews had two more good chances on a late power play in the period. Toronto outshot the Rangers 13-11 in a sloppy first period that saw New York win just 24 percent of face-offs.

It was more of the same in the second with Toronto outshooting the visitors 9-2 to start the period. Georgiev was rock-solid, however, with a highlight-reel pad save on Hyman from point-blank range.

"It just wasn't going in," Hyman said. "Give credit to their goalie, he played great. I thought (Andersen) played great as well."

The Maple Leafs gave up the opening goal for the seventh straight game (2-4-1). ... Georgiev has now stopped 130 of 136 shots in three career appearances against Toronto. ... Georgiev started for the 11th time in the Rangers' last 22 games. Four of his last six starts have gone beyond regulation. ... Toronto C Frederik Gauthier, returning after a two-game absence due to a foot injury, appeared in his 100th career NHL game. ... The Rangers were missing F Chris Kreider, F Jesper Fast, F Connor Brickley, F Fredrik Claesson and D Libor Hajek. ... The Maple Leafs were without D Jake Gardiner and D Travis Dermott.