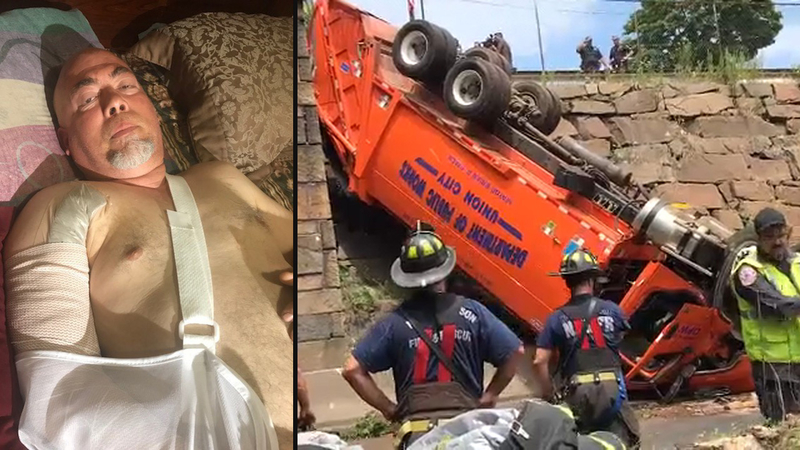 NEW YORK (WABC) -- The driver of a Department of Public Works garbage truck that crashed off an overpass in New Jersey Wednesday and snarled the evening commute for hours is speaking out, saying the vehicle's brakes failed and that he did everything he could to minimize the damage.

"It's a miracle that I'm alive," Eulalio Diaz said. "It's amazing that I walked out of that truck by myself."

Twelve people were injured when the sanitation truck crashed through guardrails and overturned in the westbound lanes of Route 495 in Union City, the main conduit out of the Lincoln Tunnel.

"I lost the brake, the truck kept on going, I couldn't stop," Diaz said, confirming reports that he was standing in the vehicle in an effort to press the brake harder. "I tried a lot of things, but it didn't work."

The crash happened around 1 p.m. off the Palisade Avenue overpass and brought traffic to a halt. The truck slammed into several vehicles before going over the edge of the roadway.

"The only thing I remember is that I tried to hit a soft spot, not to hit another vehicle," Diaz said.

The 53-year-old driver was hurt in the crash and spoke from his bed, where he is recovering from a slew of injuries.

"I'm doing better," he said. "I've still got a lot of pain. The top of the my head, they say I have a laceration on the top of my head, a broken arm, a few broken ribs."

Still, he's most thankful that none of the victims' injuries are life threatening -- and that he survived himself.

"I am glad I'm alive and the truck stopped somewhere at a point where it didn't kill people or destroy more property," he said. "I tried to cushion the blow the best I could with the little time I had."

The investigation into the crash and the cleanup are ongoing.