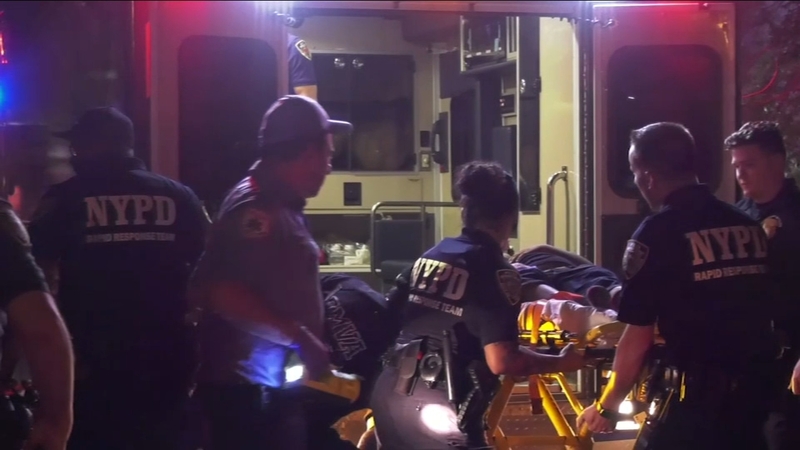 Mother speaks out after 6-year-old son wounded in shooting

CROWN HEIGHTS, Brooklyn -- Shots rang out overnight in Brooklyn, sending five people to the hospital including a 6-year-old boy and his mother.

Two men were arrested and are being questioned.

The shooting happened just a short distance from J'ouvert celebrations.

The mother and boy were getting out of a cab when two people started shooting into a crowd that was gathered around a small party in front of a house.

The shooting is believed to be gang-related, but it's unknown who was the intended target.

The J'ouvert celebration was supposed to be virtual this year, but hundreds still took to the streets overnight.

He was shot in the leg and is expected to survive.

The chaos took place near the intersection of Crown Street and Nostrand Avenue.

Crowds gathered at the shooting scene.

Three men and a woman, confirmed by family to be the boy's mother, were also shot.

They were taken to Kings County Hospital, and all are believed to have injuries that are considered non-life-threatening.

Over the last several months, there have been double the incidents over this same time last year with more than 1,200 victims.

NYPD's chief of department tweeted about the "senseless violence."

At tonight’s senseless shooting in Brooklyn where five people were shot, officers also arrested two men — and recovered two guns. The investigation is in its early stages and is ongoing. We’re asking anyone with information to contact @NYPDTips at #800577TIPS. pic.twitter.com/ChjdMlurj3

The president even weighed in on the violence in Brooklyn.

Rochester N.Y., Brooklyn N.Y., Portland - All had bad nights, all weakly run by Radical Left Democrat Governors and Mayors! Get the picture?

The shooting happening just around the corner where crowds gathered to celebrate J'ouvert.

The traditional parade is not happening this year due to the coronavirus.

This is a much different scene than what we are accustomed to, but still, some didn't let the cancellation stop them.

Some 300 people gathered for their own unofficial parade on Eastern Parkway starting at Washington at around 2:30 a.m.

The NYPD allowed them to march.

Candace McCowan has more on the march from Crown Heights.

It was a much smaller crowd than what you typically see on Labor Day. But the crowd insisted on celebrating.

"We're here. It's Labor Day. They said we couldn't come outside. We're outside," a participant said.

The virtual festivities did kick off Sunday with a virtual version of the Summer Jam youth festival.

That meant putting on those same traditional colorful costumes for a Zoom festival.

Organizers are asking everyone to still celebrate, just safely at home.