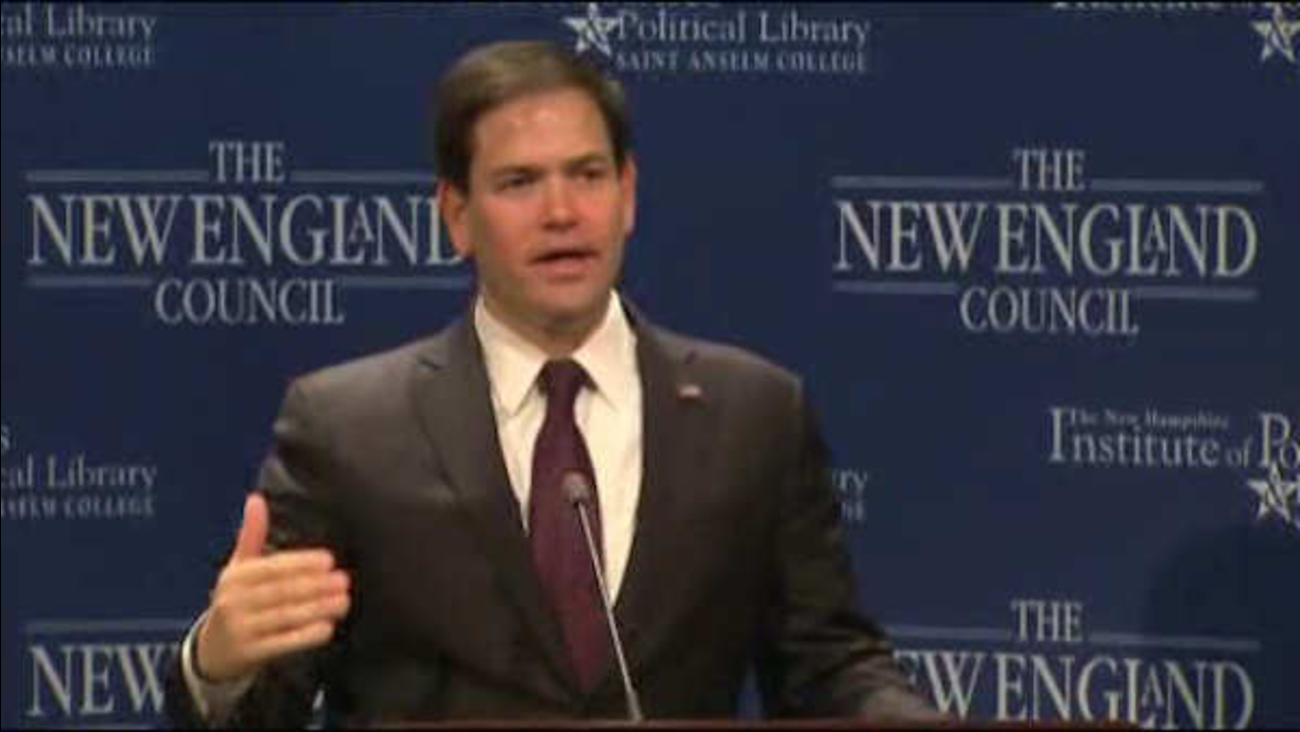 MIAMI -- Hoping to turn his relative youth into a benefit, Sen. Marco Rubio entered the presidential race Monday with a promise to move politics beyond the past, a jab at both Democratic favorite Hillary Rodham Clinton and his one-time Republican mentor, former Florida Gov. Jeb Bush.

Rubio is betting voters' frustrations with Washington will help him defeat two members of America's political dynasties and capture the White House. The first-generation Cuban-American faces an uphill climb to the GOP nomination in his effort to reshape how the electorate views Republicans as a party.

Rubio, 43, spoke with his top donors a day after Clinton announced her bid for the Democratic nomination and as she was traveling to Iowa on her first trip as a candidate. Rubio, a first-term Republican from Florida, told his most generous backers that he feels "uniquely qualified" to pitch his party as one that will defend the American Dream.

In previewing his campaign's central message to donors, Rubio said the dream is slipping away for too many families and young Americans face unequal opportunities to succeed. He's banking on the hope that he, alone among many GOP rivals, can make inroads with groups that have long eluded Republicans - young people, minorities and the less affluent.

"I feel uniquely qualified to not just make that argument, but to outline the policies that we need to have in order to achieve it," he said.

Clinton's entrance into the race with an online video Sunday is robbing some attention from Rubio's splash into the race. But Rubio saw an opportunity to cast the presidential contest as one between a fresh face representing a new generation of leadership and familiar faces harking back decades - namely, the 62-year-old Bush and the 67-year-old Clinton.

"The Republican Party, for the first time in a long time, has a chance in this election to be the party of the future," Rubio told his donors.

The swipe at Bush was implied; with Clinton, he was more direct.

"Just yesterday, we heard from a leader from yesterday who wants to take us back to yesterday, but I feel that this country has always been about tomorrow," he said.

Rubio was born when Clinton was in law school and beginning to date her future husband, Bill Clinton.

A young man in a hurry, Rubio will no doubt hear rivals and critics tell voters he's not ready for the White House, is untested and inauthentic.

Hours before his rally, the chairwoman of the Democratic National Committee, Rep. Debbie Wasserman Schultz of Florida, criticized Rubio as just another establishment Republican with no new ideas.

"He's a follower, peddling the same tired Republican playbook," she told reporters. "Marco Rubio has pandered to the Republican base throughout his whole career."

To counter views of him as a neophyte, Rubio has outlined specific policy proposals both on foreign and domestic issues. He plans future presentations as his campaign gets underway.

On Tuesday, on his first day as a candidate, he is set to return to Washington to join a Senate hearing on a proposed deal with Iran on its nuclear ambitions.

Rubio faces steep challenges to the nomination, including a well-funded one that Bush is expected to offer. The son of one president and brother of another, Jeb Bush was governor while Rubio was speaker of the Florida House. The two formed a close bond, but a presidential campaign was certain to test the strength of their friendship.

Rubio is the third major GOP contender to declare himself a candidate, after Sen. Ted Cruz of Texas and Sen. Rand Paul of Kentucky, in a field that could grow to 20 or more.

Rubio could make history as the nation's first Hispanic president (as could Cruz).

Dating back to his election to the Senate in 2010, Rubio has pitched himself as the embodiment of American opportunity, as the son of a maid and bartender who worked his way through law school and now sits in Congress - and, perhaps, come 2017, the White House.