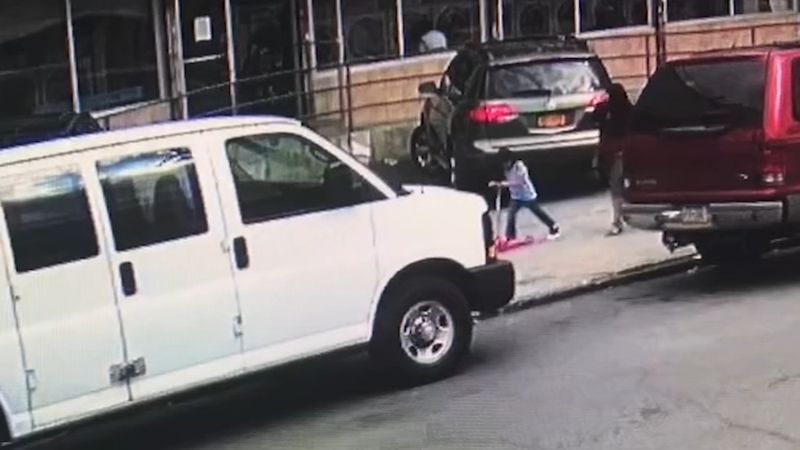 BUSHWICK, Brooklyn (WABC) -- The Department of Buildings confirmed Monday it had opened an investigation into the "legality of the parking lot" at a laundromat in Bushwick, Brooklyn where a 4-year-old girl was hit and killed Sunday evening.

A spokesperson for the DOB said the department launched the investigation following inquiries from 7 On Your Side Investigates about the safety of the parking lot, which due to its layout, leads to cars driving on the sidewalk to access a series of parking spots lining the laundromat.

On Sunday around 4:30 p.m., a 38-year-old female drove her Nissan Rogue over a 4-year-old girl who police said had bent down with her mother on the sidewalk to tie her shoe.

The 4-year-old girl died from her injuries. Her 39-year-old mother was taken to Wyckoff Hospital and was said to be stable.

Witnesses to the tragedy complained it was a long time coming due to the dangerous nature of the parking lot.

"It's dangerous," said Rachel Rodriguez, who also uses the laundromat. "If it's not a bicyclist, it's a little kid riding a scooter. I see it all the time and I'm like 'Oh my gosh,' and unfortunately this happened."

"As far as I'm concerned, the laundry should not tolerate people parking here," added Annie Singh who witnessed the tragedy.

Police identified the victim as 4-year-old Luz Gonzalez of Brooklyn.

Officers stopped the driver down the street from the incident but declined to file charges.

An NYPD spokesperson said they found "no criminality" and indicated the woman was not aware she had run over the girl, despite gruesome surveillance video which captured her rolling over the girl with both her front and back tires and then leaving the scene.

The New York Fire Department also offered an explanation for its response time to the tragedy after several witnesses complained it took nearly 10 minutes for paramedics to arrive when Wyckoff Hospital was only a few blocks away.

A spokesperson for FDNY explained the fire department does not dispatch ambulances from hospitals but from set points around the city.

The closest ambulance to this incident, he said, was roughly a mile away at Flushing Avenue near Broadway and Throop Avenue.

The spokesperson indicated FDNY received an initial notification about the incident at 4:30 p.m. and arrived by 4:39 p.m.

He said Sunday had marked a busy day for medical calls with over 1,100 in Brooklyn and 4,600 citywide.

According to the spokesperson, six to eight minutes is a typical response time for paramedics, but he said a nine-minutes response was not out of line.

On Monday, community members stopped by the laundromat to pay their respects to the 4-year-old victim and drop off notes, candles and flowers at a growing memorial.