7 On Your Side: Cell phone owner says her Samsung suddenly exploded 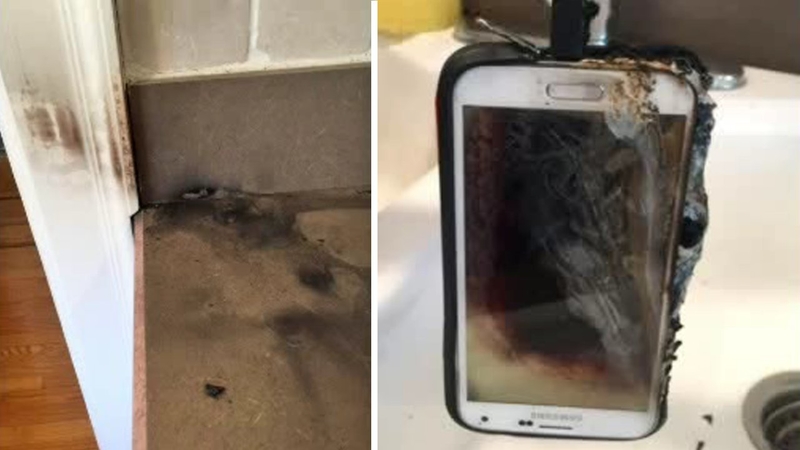 MOUNT VERNON, New York (WABC) -- A viewer told 7 On Your Side that her Samsung Galaxy S5 suddenly burst into flames. After putting the fire out, she says she couldn't get a refund.

It's a picture that still sends chills through Anne Sweazey; the charred remains of her Samsung cell phone.

"I heard an enormous bang, a very loud explosion," Sweazey said. It happened as she was working in her home office, that's when she says she heard the sound of a gunshot coming from her kitchen.

"I ran over here, here's where the Samsung phone was being charged, it was engulfed in flames," Sweazey said.

She yanked it out by the charger and threw it in the sink.

"I beat it out with a towel and got the flames out. I burned my hand, but managed to extinguish the flames," Sweazey said.

The cabinet above where it was plugged-in - singed. Her phone was the Samsung Galaxy S5, not the Samsung Note 7 - recalled earlier this year after it's batteries over heated and sparked fires. Sweazey contacted Samsung to report her phone's fire and ask for a refund.

Sweazey sent Samsung the phone. They also wanted proof of purchase, but she no longer has it for the 2 1/2 year old phone. Luckily her store where gave her this letter proving the original cost, more than $500.

She sent photos, the fire marshal's report and an electricians report. "Verifying there's nothing wrong with my outlet," Sweazey said.

After almost three months of back and forth, the former Mount Vernon Councilwoman wrote to the Samsung CEO. She did get a phone call with a request for the exact same documentation she had already submitted.

So 7 On Your Side contacted Samsung.

Within hours, a representative from the multi-national conglomerate left a voicemail saying they will be providing the full refund, $519.99.

The Consumer Product Safety Commission has three reports on their website on the Galaxy S5 over heating, smoking and sparking a fire.

Samsung Corporate Statement:
"We have reached out to Ms. Sweazey to apologize for her customer service experience and offer her our support. We are working to learn more about what happened and are in the process of investigating the incident. Until Samsung thoroughly examines any device, it is impossible to determine the true cause of any incident. Mobile phones are complex products and there are many factors that could contribute to their malfunction. We stand behind the quality and safety of the millions of Galaxy S5 family phones in the U.S., and there are no known issues with these devices. Any customer who has questions or experiences an issue with a Samsung product should contact us directly at 1-800-SAMSUNG."
Report a correction or typo
Related topics:
technologyfiresamsung7 on your side
Copyright © 2021 WABC-TV. All Rights Reserved.
7 ON YOUR SIDE
Dry cleaner disappears after taking brides' wedding dresses, deposits
What to know about holiday shipping deadlines, delays
Giving Tuesday: 7 On Your Side tips to avoid getting scammed
Cyber Monday deals: Strategies to shop and save big
TOP STORIES
Child among 3 injured after floor collapses at Bronx salon
Man seen wandering NYCHA hallway with what appears to be a sword
Man stabbed in the eye, has bag stolen in Midtown
Chris Cuomo was accused of harassment days before CNN firing
Bob Dole, longtime public servant and WWII veteran, dies
Lincoln Center annual Christmas tree lighting takes place Monday
Parents knowingly sent child with COVID to class, prompting quarantine
Show More
AccuWeather Alert: Windy and warmer with showers
Tri-State omicron case count up to 10 as hospitals strain
COVID outbreak on cruise ship approaching New Orleans
Homeowner told to take down 'Christmas Vacation' display or face fines
Man says he helped parents of accused Michigan school shooter
More TOP STORIES News