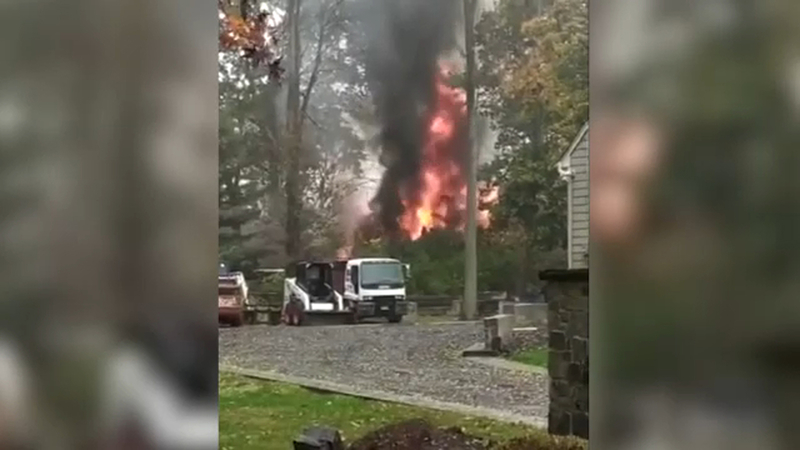 The experienced pilot, identified as Michael Schloss, crashed into a neighborhood just miles away from Linden Airport where he intended to land.

It was a trip Schloss' friends indicated he made regularly when traveling between his two homes in Virginia and New York.

The crash happened around 11 a.m., destroying at least one home and damaging at least two others.

Officials said no one on the ground was injured but Schloss, the only occupant of the pilot, died in the crash.

According to others who have traveled through Linden Airport, pilots land manually and generally need 2.5 miles of visibility to safely complete the task, but around the time Schloss was approaching the airport, visibility was dropping rapidly.

"It's a perfect set up for that loss of control," said retired pilot J.P. Tristani, who speculates Schloss experienced a deadly combination of dangerous conditions and errors in the minutes before the Cessna 414 dropped out of the sky.

"He's looking out for the airport, he's trying to fly instruments, he's down at a low altitude, he's got limited visibility and his airspeed is fluctuating. All of those lead to vertigo and a probable stall," Tristani said.

Port Authority radar tracking the plane's final moments show the aircraft traveling at just over 1,400 feet and at 118 mph around 10:55 AM.

Two minutes later, the plane had dropped 700 feet and the plane's speed was down to 91 mph.

Within 30 seconds, the plane appears to have dropped another 20 feet before briefly regaining speed and height over a period of 15 seconds.

Then, the radar shows the plane plummeting, dropping 88 feet in 15 seconds, followed by another 243 feet, 10 seconds later.

At that time, radar clocked the plane traveling at just 42 mph.

Within three seconds, the plane dropped another 56 feet and 7 seconds later, another 100 feet, meaning Schloss would have been flying around the height of a 25-story building.

"And then you are too close to the ground to make a recovery," Tristani said. "That has killed many a pilot."

It's around that moment the radar drops off and Schloss crashes into a home.

A spokesperson for the National Transportation Safety Board, sent to evaluate the crash, indicated the official investigation would take several days.