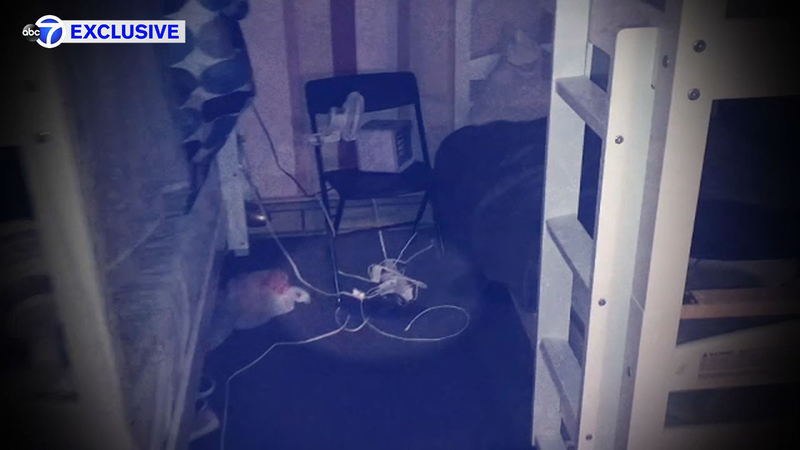 KEW GARDENS, Queens (WABC) -- A 7 On Your Side undercover investigation exposed illegal apartments rented and outfitted with bunk beds to house up to eight people. But with doors nailed shut, tenants' lives could be in danger.

Anna Karlsson turns basements into barracks with rows of bunk beds she rents for $200 per week, per bed, and our investigation exposed how her illegal rental operation generates tens of thousands of dollars by placing young men in fire-trap living conditions.

Karlsson scheme starts with her renting an illegal basement apartment, and she then places ads on Craigslist offering beds to renters for $200 a week.

"I don't put anyone's life in danger," she insisted when we confronted her outside one of her basement rentals.

But one of her former tenants concerned about the fire-trap conditions provided us with video that shows a basement door nailed shut with a two-by-four.

"I didn't know the door was nailed shut until I slept there, and I moved a curtain and saw the board nailed across the door," Jonathan Sulaymanov said.

That's when Sulaymanov decided to contact 7 On Your Side Investigates.

"I realized this is a big fire hazard, and I had to do something about it," he said.

Undercover video provided by Sulaymanov shows the inside of one Karlsson's sublet basement apartments in Kew Gardens, Queens. It reveals eight bunk beds crammed into one basement room, with a tangle of extension cords by most of the beds.

The former tenant was able to get Karlsson on video bragging about how she rents illegal basement apartments so that the landlord will be fearful about calling police when she turns them into a money-making dormitory.

"I look for illegal apartments, because if I'm going to do this, I want to make sure I can't get evicted," said Karlsson, who was unaware that she was being recorded. "Knowing you have the law on your side is worth it, because then you can put up a bunch of people in housing."

When we confronted Karlsson, she denied she was doing anything wrong but insisted she's shutting down her basement operations.

"I'm moving all my people out, " Karlsson said. "When I rented it, I did not know it was illegal."

The Department of Buildings is now investigating complaints about illegal conversion at one of Karlsson's Queens basement apartments.