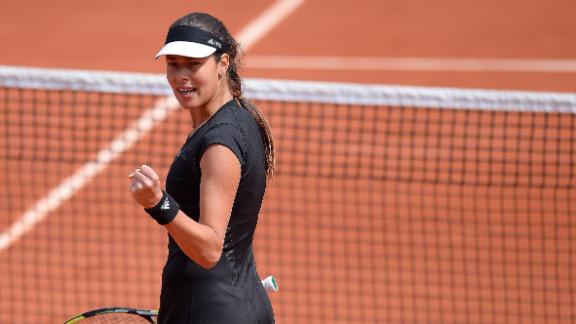 PARIS -- Defending champion Maria Sharapovacontinued her dominance over Samantha Stosuras she thumped the Australian in straight sets Friday to advance to the fourth round of the French Open.

The second-seeded Russian beaten Stosur 6-3, 6-4 for the 15th victory in 17 meetings between the two. It was Sharapova's first serious test this year, and she passed it with ease, in a sharp contrast to her previous match with Stosur in Paris last year, when she trailed 6-3, 4-3 before turning it around.

The 28-year-old Sharapova is seeking her third French Open title, having also won it last year and in 2012, and her sixth overall.

She next plays No. 13 seedLucie Safarova and leads the Czech player 4-1.

Meanwhile, after struggling in her first two matches at the French Open, Ana Ivanovicneeded just53 minutes to return to a fourth round at a major tournament for the first time in more than a year.

"After the first two matches, I really started to get a little bit of feeling and groove," said the Serb, who was pushed to deciders in the first and second rounds after twice losing the opening set.

The last time Ivanovic made the fourth round of a major was at the Australian Open in 2014. She was eliminated by 142nd-ranked Lucie Hradecka in Melbourne earlier this year after playing with a broken toe.

Since winning the title seven years ago, Ivanovic has never progressed past the fourth round in Roland Garros. Her next opponent on the Parisian red clay will be No. 9 seed Ekaterina Makarova, who defeated Elena Vesnina 6-2, 6-4.

Also advancing were No. 13 Lucie Safarova and No. 19 Elina Svitolina.

"The first two matches I really felt like I had kind of a slow start," Ivanovic said. "This is something I really wanted to change today."

Playing on Court Suzanne Lenglen, Ivanovic was broken in the third game of the second set. She recovered quickly though, winning five of the next six games.

Also, local favorite Alize Cornet advanced to her maiden fourth-round match in 11 attempts at her home tournament with a 4-6, 6-3, 7-5 hard-fought win over Mirjana Lucic-Baroni, who finished with 59 unforced errors after her all-risk approach backfired.

Cornet celebrated her victory as if she had won the tournament, falling onto her back, letting out a scream and then bursting into tears.

"At last, I'm into the second week at Roland," Cornet said. "I've been waiting for this for 11 years."

Ivanovic cruises into fourth round
Ana Ivanovic dismantles Donna Vekic 6-0, 6-3 in the third round at the French Open.

Cornet rallies to reach fourth round
Alize Cornet defeats Mirjana Lucic-Baroni 4-6, 6-3, 7-5 in the third round at the French Open.