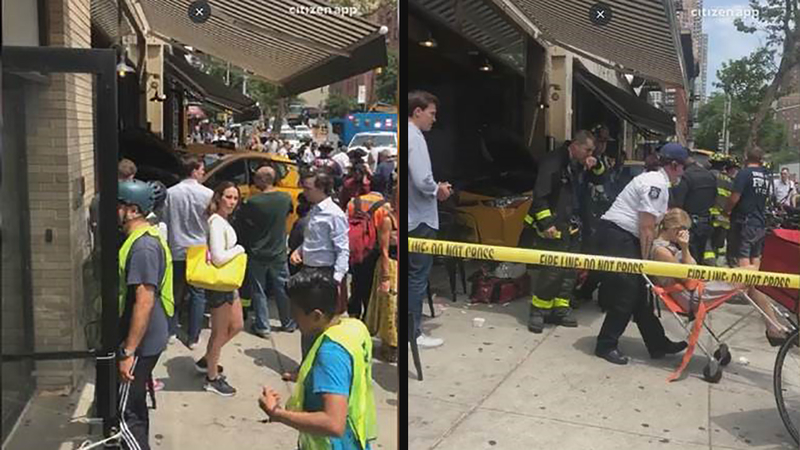 HELL'S KITCHEN, Manhattan (WABC) -- Eight people were injured when a taxi crashed into a restaurant in Manhattan Thursday.

It happened at 53rd Street and Ninth Avenue in Hell's Kitchen, with the cab hitting a mixed-use occupancy building with Westville Hell's Kitchen on first floor and 10 apartments above.

Citizen App showed victims being treated, some of whom were apparently sitting outside.

Five patients were taken to the hospital, while three refused medical aid. None of the injuries is believed to be life-threatening.

The crash left behind quite a mess in front of the restaurant, including a mangled bike that responders had to pry from under the cab.

Eyewitnesses say the delivery man who rides the bike had just hopped off minutes earlier, and another witness said the crash happened because the cab was trying to maneuver around another car and lost control.

Law enforcement corroborate that, but the cabbie -- who stayed behind at the scene -- claims he was hit from behind by another vehicle, which caused him to lose control and swerve into the restaurant.

Whatever happened, there's no doubt the outcome could have been much worse.

Inspectors from the Department of Buildings found that impact caused minor damage to the restaurant doors, and there was no structural damage to the building.

The investigation is ongoing, and the sidewalk has since reopened to pedestrians.