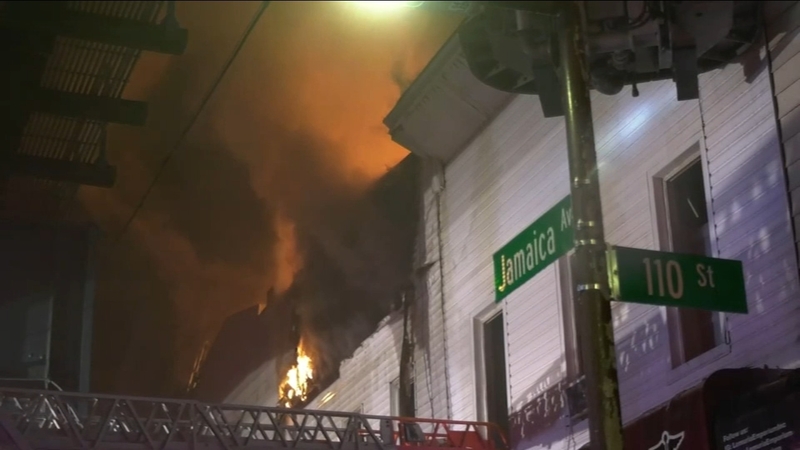 The fire started in one building on Jamaica Avenue just after 1 a.m. and quickly spread to as many as five others.

Dozens of residents who live above the first floor storefronts were put out of their homes.

Two-hundred firefighters battled the blaze. Firefighters say it started in Angel's Beauty Salon and within minutes, the neighboring businesses were engulfed.

"We had fire on the first floor of that address," said FDNY Assistant Chief John Hodgens. "The fire quickly extended to the space between the top floor and somewhat of an attic space, we call it the cockloft. Because of that, it extended quickly to six other buildings. We had fire in a total of six buildings at the site."

Many of the displaced residents huddled together in the cold, wearing jackets and clutching belongings. Eventually they waited on an MTA bus.

40 people are homeless this morning after a 6-alarm fire in Richmond Hill along Jamaica Ave and 110th Street. Thankfully on 3 firefighters with minor injuries. The cause is under investigations @ABC7NY pic.twitter.com/O5fWM2Njk7

No residents were hurt, but forty people have been left homeless.

Mercedes Romero has owned the salon where the fire started for 12 years. She said the business was her life and is now a total loss.

The FDNY said Friday that the cause of the fire was an unattended candle. Smoke alarms were not present.