'It's really hard because of COVID-19': Letters to Santa reveal toll pandemic is taking on kids Writing letters to Santa is a tradition for children every year, but this year, those annual requests are taking on new meaning.

Many of this season's letters reflect the reality of a year that was incredibly difficult for so many.

Jonah wants nothing from Santa this year except for a cure for coronavirus, while Anthony told Santa he wants a magical button he could press to transport him away from the weary reality of the pandemic.

Jasmyne's Christmas list is short and to the point.

"This year, I would like end of COVID-19, world peace, climate control, new Xbox," it reads.

In their letters to Santa, kids across the US are still asking for toys, clothes, LEGOs and video games. But in a year filled with illness and uncertainty, a review of letters addressed to the North Pole and collected through the Post Office's Operation Santa program reveals the pandemic is weighing heavily on children.

"Dear Santa," Jonah wrote. "I don't want anything for Christmas, but I would like to ask you if you can do me a favor: Can you please find a cure for COVID-19 and give it to us to save the world. Thank you." 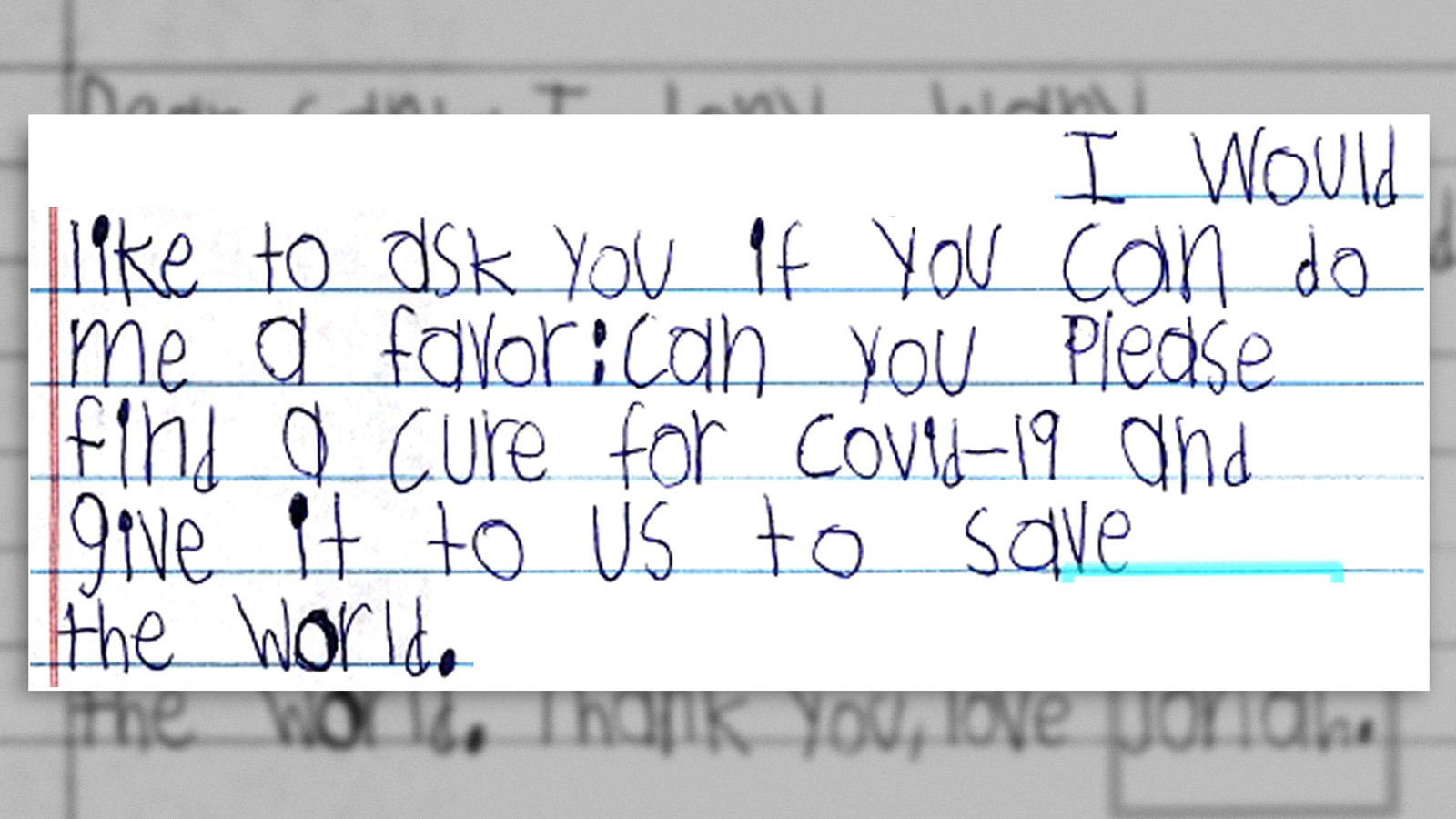 Some are imploring Santa to make coronavirus go away, while others are asking for masks for Christmas. Still others write about the challenges of going to school online or how their parents can't afford to buy presents this year because they lost their jobs.

"You don't lie to Santa, so it's almost like writing in your diary," said Dr. Natalie Weder, with the Child Mind Institute. "Sometimes we as parents we want to fix things, want our kids to feel OK, can't tolerate their pain. It is very important we listen to them and take their concerns seriously. If we don't, they feel like we don't understand them and keep things inside, and they can feel more isolated."

Experts say it's important to reassure kids this is temporary.

"They're really good detectives," Dr. Weder said. "They hear what's going on, worry about their money, worried about their health."

Dr. Weder says one way to ease their concerns is to create new traditions, such as writing letters to frontline workers.

"That makes kids feel powerful, have purpose, can help in this crisis," she said.

"What I read in these letters is that kids really are thinking about the needs of their parent or the world and not just their own desires this year (though of course some kids are asking for the gifts they want this year, which is to be expected!)," Cohen said in an email to CNN. "Mr. Rogers is known for saying look for the helpers in scary situations. This is our chance to be the helpers and have our kids be the helpers, even in small ways."

Since October, children and adults in the US this year have sent more than 10,000 notes and cards to Santa -- many of them reflecting the year's hardships, said Kimberly Frum, a spokeswoman for the USPS.

"2020 has seen its share of challenges affecting individuals and families in so many ways," Frum said in an email to CNN. "COVID-19 resulted in job losses, temporary unemployment and sadly, the loss of family and friends...The program has always been about providing holiday gifts for families who may not have the means to provide for anything more than basic everyday needs. This year, there are likely more families impacted financially and emotionally."

Most of the letters to Santa have already been adopted by donors, Frum said.

In a holiday season unlike any other, with masked Santas behind plexiglass barriers, the annual tradition of writing letters to the North Pole may provide children with a bit of normalcy. But the sentiments in many of their letters aren't quite like normal.

A 13-year-old Texas girl named Kimberly is not unlike many kids in asking Santa for AirPods. But she also pleaded for gifts for her three siblings and for her money-strapped parents: a workout machine for her mom and a waterproof jacket for her stepdad.

"This year has tough to all of us due to COVID19," she wrote. "My stepdad is the only (one) working and because of COVID-19 he had to stop working full time. Now he is working less because of COVID, and all the money he gets is for paying the rent and the bills. My parents think I am writing this for my siblings and I, but I want to surprise them for everything that they have done this year."

Nine-year-old Alani asked for some LEGOs and a gift card for her mom, and she drew a smiling girl with curly hair standing with Santa -- a cheery scene that belied the plaintive tone of her letter.

"Dear Santa, this year has been rough...because of corona...my mom said she can't get anything for me for Christmas because she is not getting paid as much so she cannot afford anything," she wrote. 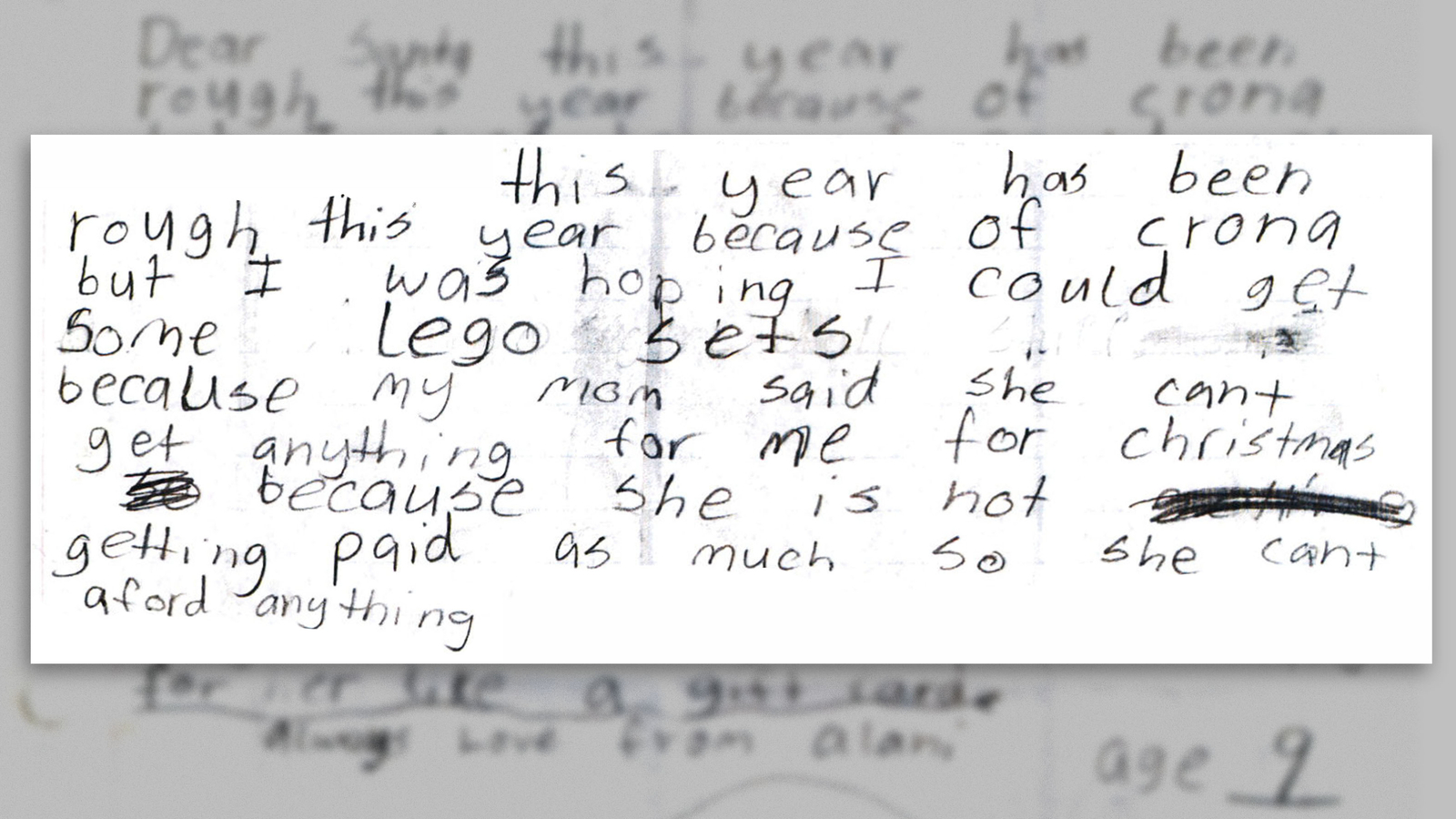 "PS, I'm sorry if I've been bad," she wrote. "It's really hard because of COVID-19 and online school...I'm trying to be good. Hope you understand." 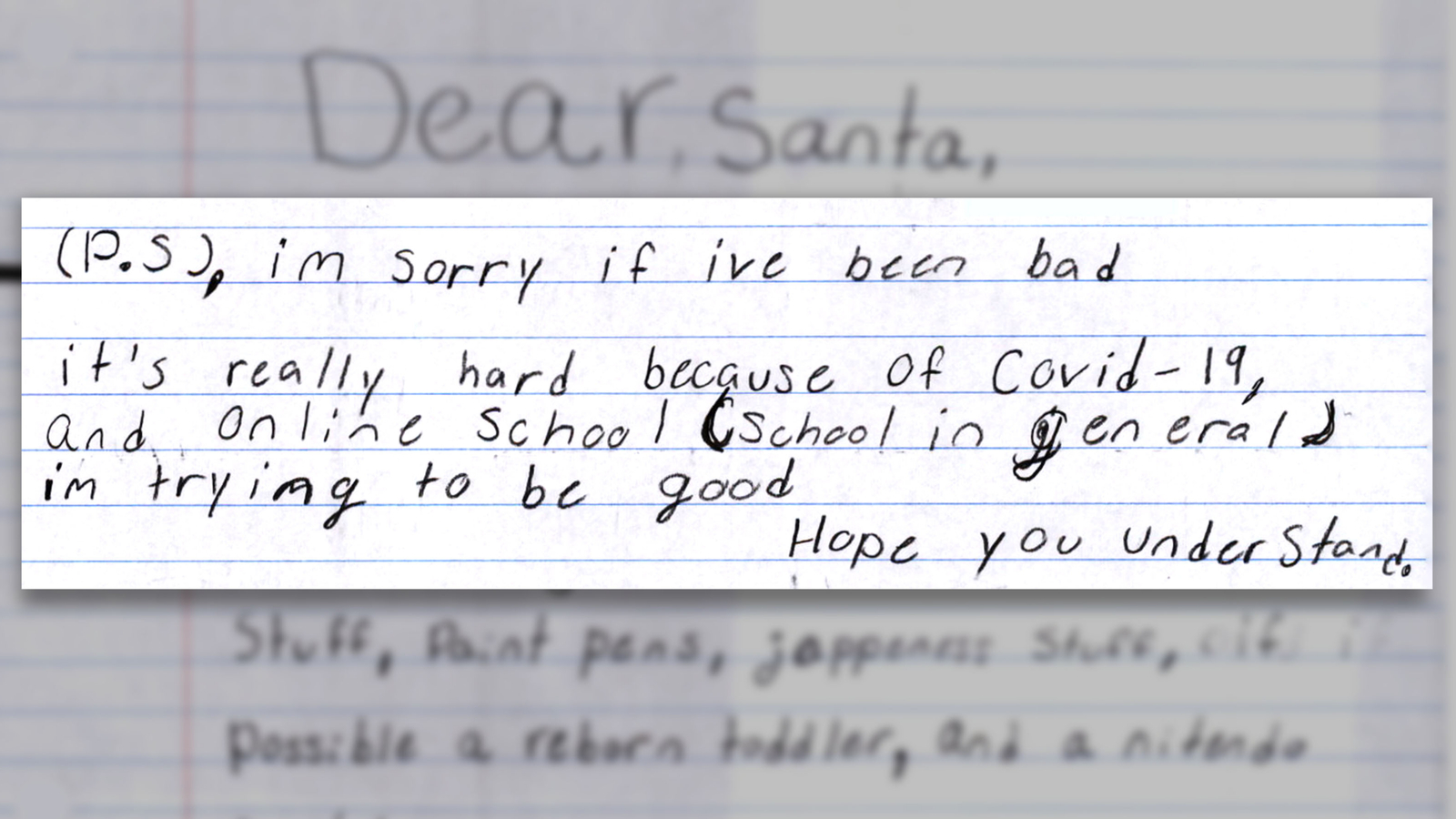 "Is there COVID where you are? If not I just want to tell you that you are lucky," she wrote. "Dad says that even though he lost his job we will still find a way to celebrate."

"I wish COVID was over so we can hug," he wrote.

A 9-year-old girl from London, England, penned a hilarious letter to Santa in which she said she thinks she should get coal for Christmas for failing to be good, but still asks for a dozen expensive and elaborate presents. 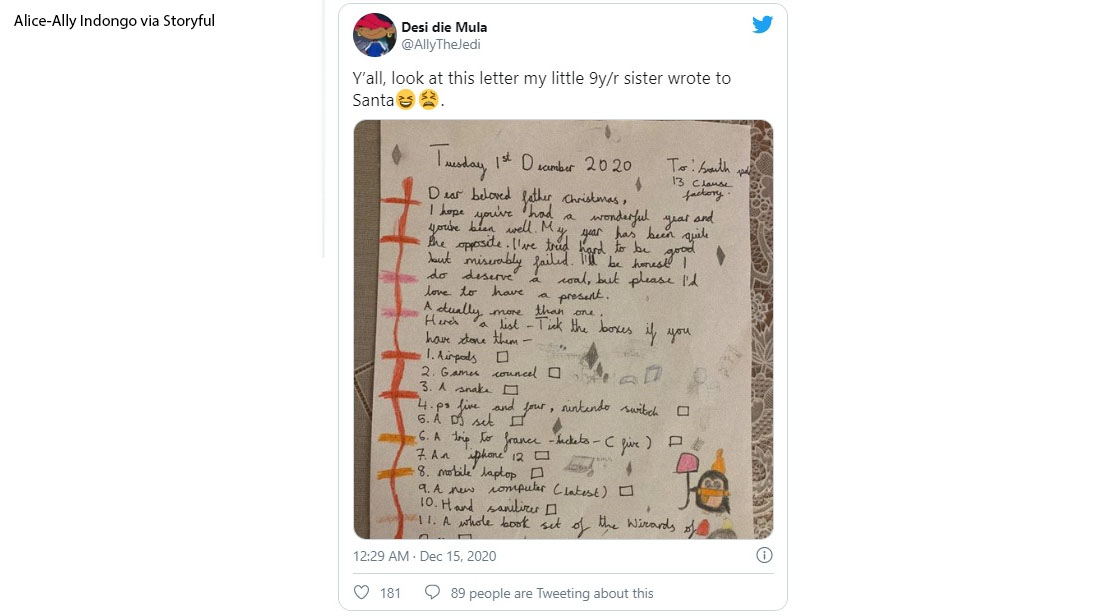 In the letter, shared to Twitter by the girl's sister, Alice-Ally Indongo, 9-year-old Michelo writes, "I hope you've had a wonderful year and you've been well. My year has been quite the opposite."

"I've tried hard to be good but miserably failed," she says. "I'll be honest, I do deserve a coal, but please I'd love to have a present."

The North Pole has come to Long Island to bring families that special holiday magic they've been longing for. Step inside the CM Performing Arts Center and walk through the cookie and candy kitchen, the gift wrapping department, the winter wonderland forest, the North Pole international post mailroom, and of course the famous sleigh!

"Christmas is way a bigger deal in Europe than it is over there," she said. "This is her second Christmas in London, and my mom put up a tree and everything so she's super excited."

(CNN and Storyful contributed to this report)