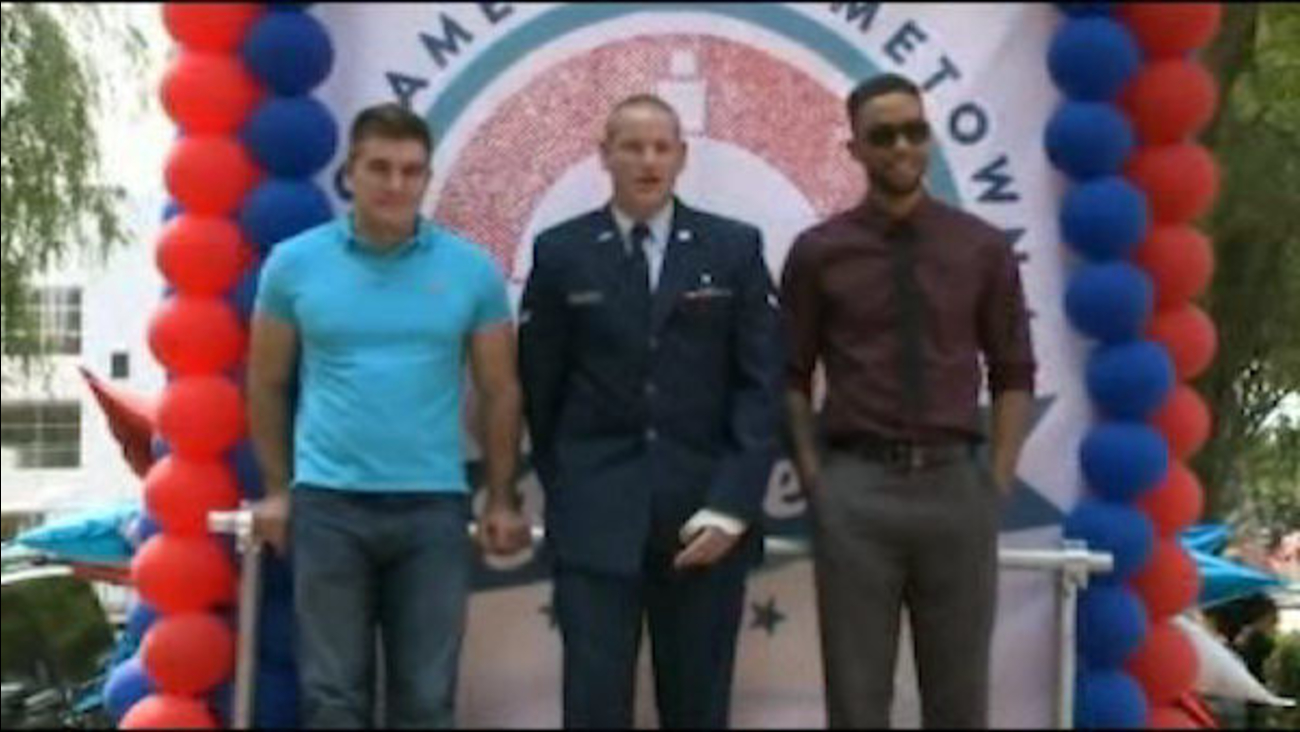 SACRAMENTO, Calif. -- Three Americans who stopped a gunman on a Paris-bound passenger train talked about the significance of 9/11 on Friday at a festive parade hosted by their California hometown and in an interview to air on national television.

It was a rare appearance by all three childhood friends - U.S. Airman Spencer Stone, Oregon National Guardsman Alek Skarlatos and Anthony Sadler - since their ordeal in August. They spoke to Megyn Kelly of Fox News' "The Kelly File" before joining a "hometown heroes" parade hosted by Sacramento Mayor Kevin Johnson.

Kelly asked the trio whether they have a different appreciation of what happened 14 years ago when the twin towers fell Sept. 11, 2001.

"I feel so much more connected to terrorist attacks and things like that and victims of terrorist attacks," said Skarlatos, 22, in an excerpt released before the interview airs Friday night. "That easily could have been us if any one of six or seven things went a different way."

Sadler, 23, said he visited the 9/11 memorial in New York recently "and it just gave me a whole new perspective. I was just appreciative of the names on the stones out there because that could have easily been us, just as easy."

Later, the friends stood on a float reading "Sacramento Hometown Heroes" as hundreds of people filled the streets to honor the men. The lunchtime mood was festive with marching bands, classic cars, patriotic balloons and lots of confetti.

"We love Sacramento, and we never thought anything like this would happen," said Stone, 23.

Each of the men took the stage on the steps of the California Capitol briefly following the parade.

"This support is amazing and we all love you," Stone said, "and like Anthony said, we don't want to forget why we're gathered today."

The parade was held to honor the trio as well as to remember victims of the Sept. 11 terror attacks. A moment of silence was held for those who died 14 years ago. A C-17 Globemaster out of Travis Air Force Base flew overhead before the men spoke.

Robert Greer, 69, watched the floats and said the city was proud.

"This is about the most exciting thing I've even seen happen in Sacramento," Greer said. "What a tremendous thing they did for France and our country, too."

"We cannot be prouder as a city than we are right now, Sacramento," Johnson said.

French Consul General Pauline Carmona in San Francisco thanked the men, saying, "The people of France as well as the whole French community in California will never forget what you have done."

After the friends foiled the attack, Sadler, a senior at Sacramento State University, appeared to cheers on NBC's "The Tonight Show" with Jimmy Fallon. Skarlatos has been booked to appear on the next season of ABC's "Dancing With the Stars."

Stone, who has been acclaimed for his aggressive role in disarming the gunman, has kept a lower profile so far after receiving medical treatment at a military base in Germany for a lacerated thumb and other injuries.