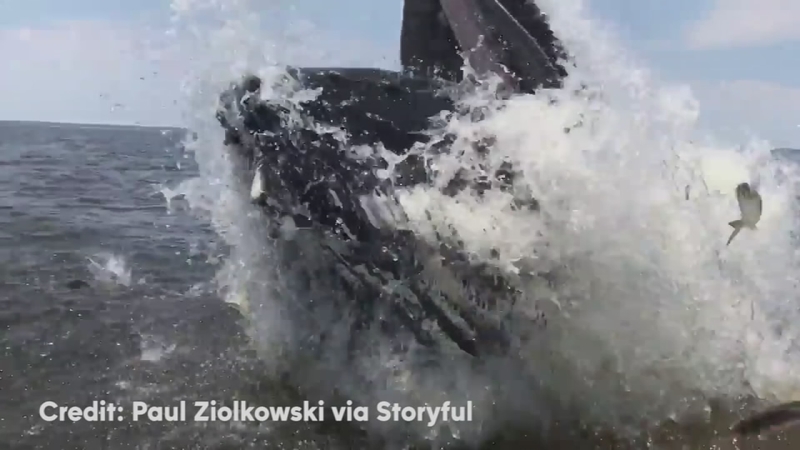 NEW JERSEY (WABC) -- A humpback whale breached extremely close to a boat off the coast of New Jersey as the passengers had their cameras rolling.

Paul Ziolkowski, who goes by Pauly Walnuts on Facebook, says they had been fishing for a couple of hours about a mile off the coast of Perth Amboy and the Verrazano-Narrows Bridge, on the border of New York and New Jersey, and saw the whale a couple of times.

"We seen a whale going up and breaching the water and we stopped the boat. We're like, 'Whoa, slow down.' So we stayed 100-150 yards away from it just to be on the safe side," Ziolkowski said.

The whale was then about 60 yards away, so they decided to move a little closer to get a better view when all of a sudden it breached right next to their boat. He said the whale was eating fish and was so close he could have slapped its fin.

Jaw-dropping video of a Humpback whale in the Hudson River.

"It's just this giant leviathan thing just pulls right up and taps the side of the hull and I'm standing right here like this, filming, and I'm like, I swear I was stuck, I was mesmerized," Ziolkowski said.

Ziolkowski wrote on his Facebook post that he was "still in shock from this guy almost capsizing us."

"This definitely was one of the craziest experiences in my life and I've had many, who --- would have thought I would see some Moby Dick --- right here outside the Verrazano on my boys 19 footer. That humpback was chasing bunker all the way up to the side jumped out of the water and tapped the hull of my boat, knocking bunker into the boat. Crazy, I know it sounds like a fish story LOL but these #NewJersey waters are serious," he wrote.

A nearby boat also witnessed the amazing spectacle and they cheered after they knew everyone on board was safe.

"I was scared afterwards when I realized what just happened and the possibility of how close we actually came to flipping over and capsizing," Ziolkowski said.

It's not unusual to see a humpback in the Atlantic Ocean these days. For the first time in a century, humpback whales have returned to the waters off New York and New Jersey in large numbers over the last five or six years.