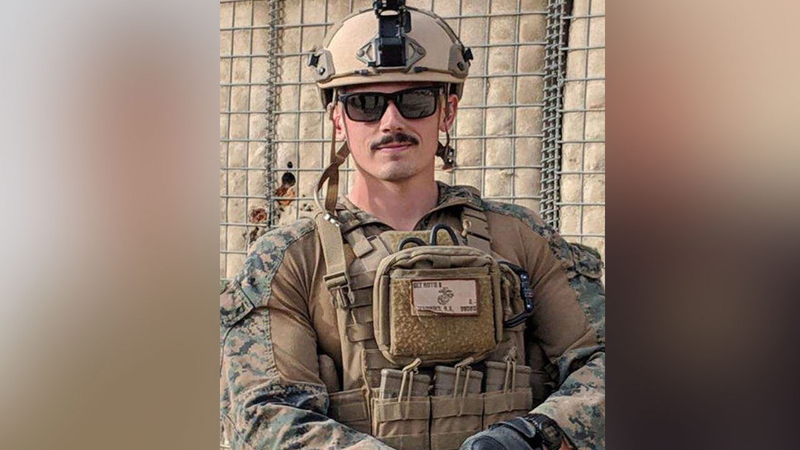 GLEN HEAD, Long Island (WABC) -- Family and friends are gathering Tuesday to remember a Marine from Long Island who was killed in Afghanistan.

A wake for Marine Sergeant Robert Hendriks is being held at Whitting Funeral Home in Glen Head. It will be followed by a funeral Wednesday morning and burial at Calverton National Cemetery.

Hendriks' body arrived back in the U.S. last week after he and two other service members were killed by a roadside bomb in Afghanistan. The Locust Valley resident died along with Staff Sgt. Christopher Slutman, of the Bronx, and Sgt. Benjamin S. Hines, of York, Pennsylvania.

Hendriks was just 25 years old and joined the military after graduating Locust Valley High School. He is being remembered as a hard-working man with a big heart.

In his honor, the Locust Valley varsity boys' lacrosse team is wearing stickers on their helmets with Hendriks' initials and the U.S. Marines logo.

The school has established a scholarship in Hendriks' name, thanks to a donation from the Stephen Siller Tunnel to Towers Foundation.

"He was my best friend," Christopher Tasso said. "He'll continue to be a compass for me as I continue on, along with everybody else he was close to."

Mary Guastella is a close friend of Hendriks' mother.

Hendriks' brother is also a Marine, and Jonathan Gordon joined the Corps with Joseph Hendriks.

"I'm actually out now, but I was active duty up until three months ago," he said. "And coming home to something like this is obviously not the most ideal situation, but we're all here for each other and we're going to come together."

Janet Marturano is Hendriks' great aunt, who flew in from Florida for the services.

"He was a beautiful person, good family, precious, precious," she said.

Sgt. Craig Hollis knew Hendriks from training with their unit - the 2nd Battalion 25th Marines - based in Garden City.

"It would be a horrible situation, and he could make you laugh going through training," he said. "One of the greatest guys we had."

Richard Hartney served with the Marines during the Korean War and came Tuesday to pay his respects.

"A special tribute to one fine Marine," he said. "God Bless him. God Bless all of them that are in the service."