AG report on police interactions with protesters: NYPD vulnerable to mistrust, in need of reform 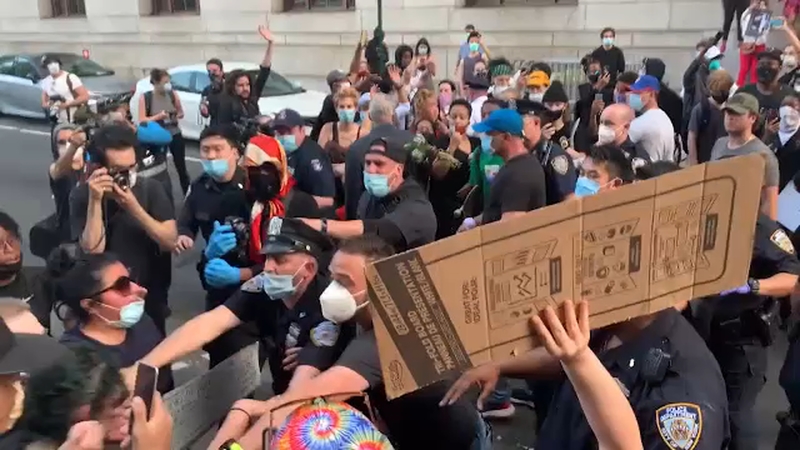 NEW YORK CITY (WABC) -- Two weeks of protest and unrest left the NYPD vulnerable to mistrust and in need of reform, New York Attorney General Letitia James concluded in a preliminary report released Wednesday afternoon of her investigation into police interactions with demonstrators.

The report, called "New York City Police Department's Response to Demonstrations Following the Death of George Floyd," does not render a specific judgment about police performance but concluded "it is clear that too many New Yorkers no longer trust the police to do their jobs effectively and fairly."

NYPD arrest data shows that 44% of those arrested were white, while 39% were Black.

Arrests involving Black people were more likely than whites to be charged with a felony.

"The vast majority of arrests between June 2 and June 6, the days of the 8 p.m. curfew, were made after 8 p.m., suggesting the curfew was a significant driver of arrests," the report said.

Police Commissioner Dermot Shea testified that he did not agree with allegations that there was widespread inappropriate use of pepper spray on protesters and that officers exercised "incredible restraint" throughout the protests.

The report made several recommendations, including:

--The NYPD must be overseen by a commission that has the authority to hire and fire NYPD leadership, including the commissioner; has unfettered access to records; and approves NYPD's budget.
--Minor offenses should be decriminalized with the goal of reducing negative contact with the police, particularly in communities of color.
--All police officers in New York should be certified through a process that allows for "decertifying" officers engaged in misconduct, preventing them from remaining a police officer or being rehired by another department in the state.
--Police officers must be held to uniform standards on use of non-lethal and deadly force and face meaningful consequences for violations.