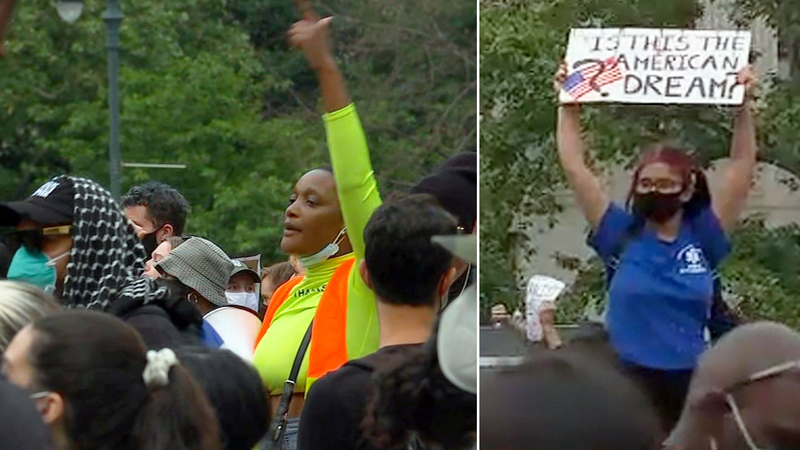 NEW YORK CITY (WABC) -- A hearing over police interactions with demonstrators during the George Floyd protests will run over into a second day Thursday due to an unexpectedly high number of members of the public submitting sworn testimony.

The Office of New York Attorney General Letitia James has been designated by Governor Andrew Cuomo to investigate interactions between police officers and the public during the recent civil unrest.

They heard testimony about several incidents, including one of the most well known interactions in which an officer pushed a woman to the ground near the Barclays Center on May 29.

20-year-old Dounya Zayer was hospitalized after suffering a concussion and a seizure.

"He shoved me with as much force as he could, I flew out of my shoe and smacked the back of my head on the concrete," Zayer said. "Where the hell is the humanity in watching the officers assaulting, like a human for no reason."

Officer Vincent D'Andraia was suspended without pay and charged with misdemeanor assault.

"Ms. Zayer I'm sorry for your incident and I just want you to know that the officer involved really doesn't reflect the vast majority of the officers in the NYPD," James said.

"What about the officers that witnessed the assault and did nothing?" Zayer said. "I understand there are good cops, but where was the good cop to help me?"

James is asking other witnesses if they had similar videos in an effort to identify other officers accused of assaulting protestors and to help guide the panel in crafting police reform.

"Government must never be afraid of examining how it's living up to its covenant with the people," Lynch said.

More than 300 people signed up to testify or submitted written testimony.

RELATED: Audio/video in use-of-force incidents must be released within 30 days