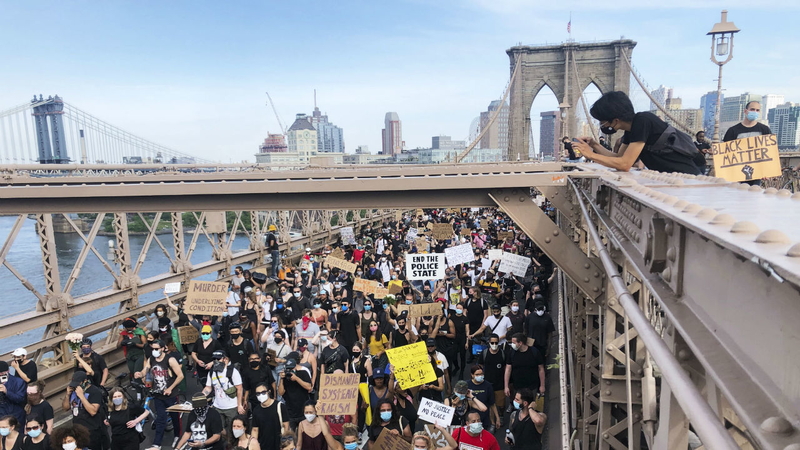 NEW YORK (WABC) -- Thousands marched across the Brooklyn Bridge to Foley Square in Manhattan following a memorial service for George Floyd, whose death last week at the hands of Minneapolis police has prompted ongoing global protests against police brutality.

Mike Marza has more on the thousands of peaceful protesters who marched across the Brooklyn Bridge into Manhattan following the memorial service held for George Floyd on Thursday.

His brother, Terrence Floyd, attended the service at Cadman Plaza Park, where videos were taken Wednesday night of officers using batons and pepper spray on protesters who remained after the 8 p.m. curfew.
"You are not alone," the large crowd chanted before an emotional Terrence Floyd, wearing a mask and a T-shirt bearing his brother's likeness, thanked them for their support.

"I thank God for you all showing love to my brother," he said.

Of the demonstrations that have engulfed the city and the nation, and the violence that has taken place, he said, "I'm proud of the protests but I'm not proud of the destruction. My brother wasn't about that. The Floyds are a God-fearing family."

Terrence Floyd attended the service at Cadman Plaza Park, where videos were taken Wednesday night of officers using batons and pepper spray on protesters who remained after the 8 p

The mayor was met with jeers in his first appearance before the protesters.

"I can't breathe," they chanted and "resign."

"We have too much to change in this city and this country," de Blasio told the crowd.

Even some of the speakers took shots at the mayor, criticizing his management of the NYPD and his administration's response to the coronavirus.

Thousands of protesters take a knee shouting no justice, no peace and #GeorgeFloyd. A powerful moment for the Brooklyn protest. pic.twitter.com/UpHXPkbEE4

Munira Siddiq, 30, of Queens, was overcome with emotion when Floyd spoke, saying she could physically feel his pain standing so close to him.

"If even a seed of change comes from this, it will have all been worth it," she said, before joining the march over the Brooklyn Bridge. "If we don't do this, nobody is going to."

In Minneapolis, celebrities, civil rights activists, politicians and family members of Floyd sang "Amazing Grace," prayed and joined together in a rousing memorial that was both a celebration of his life and a mourning of a man whose death at the hands of police has sparked protests nationwide and calls for an end to racial injustice.