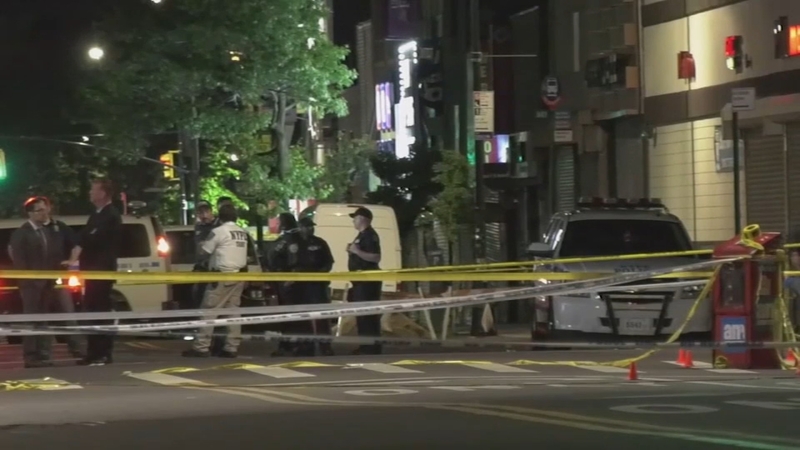 BROOKLYN (WABC) -- Three NYPD officers are hospitalized and a suspect is in critical condition after what police say was an unprovoked attack during an anti-looting patrol in Brooklyn.

The FBI and the NYPD are now working to determine if the attack was the result of homegrown extremism or more of the kind of street violence seen over the past week, law enforcement sources told ABC News.

The incident happened at 11:45 p.m. Wednesday near Church and Flatbush avenues in the Flatbush section, where police say two officers were patrolling in a patrol car when a man walked up and stabbed one of them in the left side of his neck.

Seconds later, officers nearby heard gunshots and ran towards the scene.

The FBI has joined the investigation into what the NYPD called an unprovoked attack on an officer in Brooklyn that left three officers wounded and a suspect in critical condition.

"We believe that when they got there, they saw the perp with a gun in his hand that we believe belonged to one of the officers," NYPD Commissioner Dermot Shea said. "It appears to be a complete cowardly, despicable, unprovoked attack on a defenseless police officer. And thank God we're not planning a funeral right now."

One officer was stabbed, with the suspect's knife missing a major artery, while two others were shot in the hand.

The officers were rushed in stable condition to Kings County Hospital, where many gathered overnight.

The officer was stabbed with a Rambo-style hunting knife. The NYPD released a photo of the weapon, which was recovered at the scene.

The string of violent incidents in New York City prompted the police on Thursday, to issue a reward of up to $2,500 to anyone who catches a suspect who attacks an officer.

In this case, the suspect, 20-year-old Dzenan Camovic, was shot eight times by responding officers and remains in critical condition.

He is Bosnian, according to a relative, but it is not clear whether he is naturalized or born in U.S. He lives in an apartment in Flatbush with his parents.

The relative who did not want to be identified, said Camovic never expressed any anti-police sentiments and denied that he is a terrorist.

He said he could not imagine a motive for the attack, adding that the family has sympathies for the plight of African-Americans but that Camovic had not taken part in any demonstrations as far as he knew.

"Last night's cowardly attack on the NYPD left one officer stabbed and two shot," FBI New York Assistant Director in Charge William Sweeney said. "The FBI New York office is fully engaged. We respond as if one of our own was attacked, and we will use every federal statue available to hold the perpetrator accountable."

There were 22 shots fired, though it wasn't immediately clear where the shooting came from -- whether the stabber had gained control of the officer's gun or whether the officers shot were hit in a ricochet situation by friendly fire bullets.

The NYPD is reviewing body camera footage as they work to determine exactly how the incident unfolded.

Shea issued a call for the violence on his officers to stop and said that words matter after days of protest.

"Today we stopped a car with Ohio plates that carried two men who had gravity knives, bricks, rope, pepper spray and cans of gasoline. What was their intent? This is not what democracy looks like. This is violence pure and simple," Shea said.

On the other hand, there are videos that have surfaced that show police using excessive force.

In one instance, a woman was pushed to the ground, while another involved a man being pepper-sprayed with his mask down.

"Under a very small, under the most difficult circumstances, there have been some bad videos," Shea said.

The commissioner said that without a doubt, there will be a couple officers suspended as a result of those actions.

With an 8 p.m. curfew in place, police say they have had to escort groups to outer boroughs without making any arrests, but they say if you're caught looting or spewing violence, expect to be locked up.

RELATED STORIES:
Wednesday coverage of protests and looting in NYC