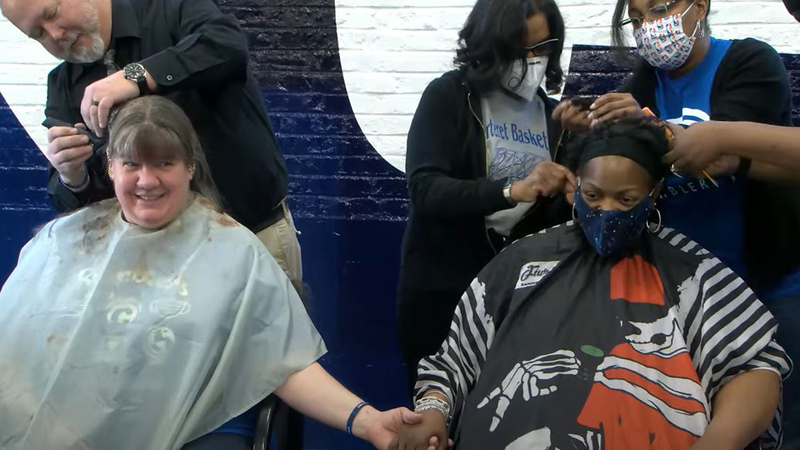 CARTERET, New Jersey (WABC) -- A New Jersey principal and teacher shaved their heads on a live stream Friday as part of a fundraiser for a student battling cancer.

Carteret High School principal Dr. Karen Jones made a deal with students that if they were able to raise $7,000 for Aiden Ramirez, a basketball star who is battling cancer for the second time, she would shave her head.

"I want to show him that we're fighting with him," Dr. Jones said.

The students understood the assignment and stepped up, and after fundraisers and donations, they surpassed their goal to the tune of more than $12,000.

A father dropped his 3-year-old son out a second-story window to first responders as a fire raged through an apartment complex in New Jersey Monday.

As a result, Dr. Jones and teacher Judee Dunn, who organized the hair cut challenge, kept up their end of the bargain.

"Aiden, you are truly someone special," Dunn said. "You and your family have been through so much over the past two years. You deserve good things to come your way."

The senior has already beaten cancer once before, and DePasquale said the entirety of the school is crushed that he is facing it once more.

"It was devastating, but you do what you can to move on," Ramirez said.

Ramirez's spirit was instilled in him by his grandparents, who have been by his side every step of the way.

"They always pushed us, no excuses," he said. "So I just kept doing what I had to do."

Grandmother Maribel Figueroa is inspired by her grandson's focus.

"I'm humbled by his courage," she said. "He's courageous. He does not complain."

As for his future in basketball, Ramirez is leaving that to the basketball gods.