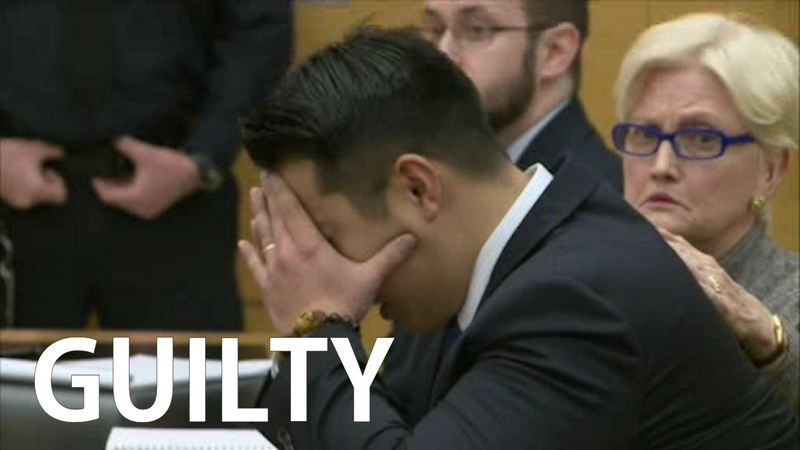 NEW YORK -- A rookie police officer who shot an unarmed man dead in a darkened public housing stairwell was convicted Thursday of manslaughter in a case closely watched by advocates for police accountability.

The courtroom audience gasped and Officer Peter Liang, who had broken into tears as he testified about the 2014 shooting of Akai Gurley, buried his head in his hands as the verdict came after 17 hours of jury deliberations. He had no comment after the verdict.

The manslaughter charge, a felony, carries up to 15 years in prison. While Liang awaits sentencing April 14, he was dismissed from the New York Police Department right after the verdict, department spokesman Peter Donald said.

But an uncertainty remains: Brooklyn state Supreme Court Danny Chun has yet to rule on Liang's lawyers' request to dismiss the charges; Liang also was convicted of official misconduct, a misdemeanor. The request was made before the verdict, which brought Brooklyn District Attorney Kenneth Thompson to the courtroom audience to watch.

"We support our police officers, but when innocent men are shot and killed through an act of recklessness, we have to hold whoever is responsible accountable," Thompson said.

Prosecutors portrayed the rookie police officer as a coward who fired his weapon into a darkened stairwell after he became startled.

The bullet ricocheted off the wall and killed Akai Gurley, an innocent, unarmed man simply taking the stairs. The defense insisted he fired by mistake and that Liang is wracked with remorse.

"We don't believe that the verdict was supported by the facts or the law, we plan on moving post-verdict in order to dismiss, and if that fails we plan to appeal," said Robert Brown, the defense attorney.

The verdict came after two full days of deliberations. For one juror, convicting Liang was not easy.

"I have family who are police and it was a very tough decision," the juror said.

The shooting happened in a year of debate nationwide about police killings of black men, and activists have looked to Liang's trial as a counterweight to cases in which grand juries have declined to indict officers, including the cases of Michael Brown in Missouri and Eric Garner in New York. Like Gurley, Brown and Garner were black and unarmed.

Relatives of other New Yorkers killed in police encounters had joined Gurley's family to speak out about the case outside court during the trial.

Meanwhile, supporters of Liang, who is Chinese-American, have said he has been made a scapegoat for past injustices.

Deliberations stretched into Thursday evening, after jurors asked to review the New York Police Department firearms guide late in the afternoon. Earlier, they had reheard testimony from Liang and other witnesses.

Liang was patrolling a public housing high-rise in Brooklyn with his gun drawn when he fired; he said a sound startled him. The bullet ricocheted off a wall and hit the 28-year-old Gurley on a lower floor.

Prosecutors said Liang handled his gun recklessly, must have realized from the noise that someone was nearby and did almost nothing to help Gurley.

"Instead of shining a light, he pointed his gun and shot Akai Gurley," Brooklyn Assistant District Attorney Joe Alexis said in his closing argument.

But the defense said the shooting was an accident, not a crime.

The 28-year-old Liang said he had been holding his weapon safely, with his finger on the side and not the trigger, when the sudden sound jarred him and his body tensed.

"I just turned, and the gun went off," he testified.

He said he initially looked with his flashlight, saw no one and didn't immediately report the shot, instead quarreling with his partner about who would call their sergeant. Liang thought he might get fired.

But then, he said, he went to look for the bullet, heard cries and found the wounded Gurley, with his weeping girlfriend trying to tend to him.

Liang then radioed for an ambulance, but he acknowledged not helping Gurley's girlfriend try to revive him. Liang explained he thought it was wiser to wait for professional medical aid.

"I was panicking. I was shocked and in disbelief that someone was hit," said Liang, who said he was so overcome that he needed oxygen as he was taken to a hospital for ringing in his ears.

Thursday night, the mother of Gurley's daughter, and her attorney, Scott Rynecki, insisted Liang deserves to be punished.

While Liang's trial unfolded, two other New York police officers, Patrick Espeut and Diara Cruz, were shot and wounded during a similar stairwell patrol in a different public housing complex. The gunman later killed himself. The judge barred any mention of those shootings in Liang's trial.

PBA President Patrick Lynch released a statement saying, "We are very disappointed in the verdict and believe that the jury came to an absolutely wrong decision. This was a terrible and tragic accident and not a crime. This bad verdict will have a chilling effect on police officers across the city because it criminalizes a tragic accident."

The DA disagreed, but refused to say whether this case raises concerns about police training.

"N.J., you heard the testimony, at the end of the day you have to put that question to the police commissioner or to the mayor," Thompson said.