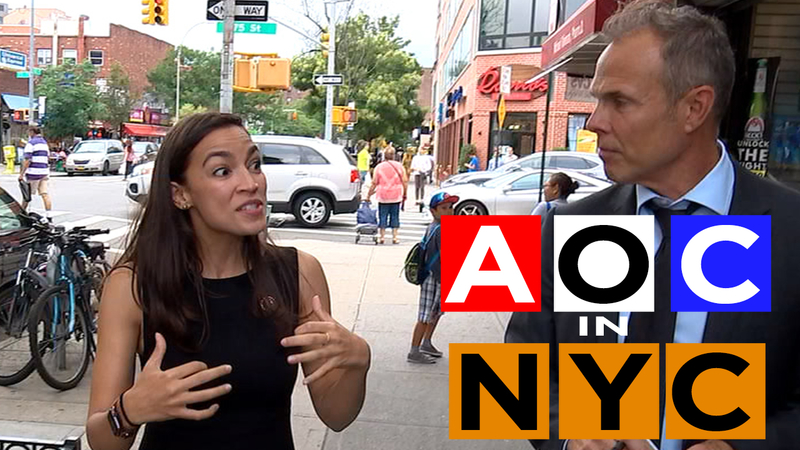 Congresswoman Alexandria Ocasio-Cortez on being a New Yorker

NEW YORK (WABC) -- In an exclusive interview with Eyewitness News, Congresswoman Alexandria Ocasio-Cortez discussed a host of topics, including how she thinks the Democrats can win against President Trump in 2020.

"Radical is not a bad word," she said.

Ocasio-Cortez, before last year, was an unknown political activist who worked as a bartender in Union Square. She surprised everyone in the democratic primary, beating long-time Congressman Joe Crowley even though she was outspent 18 to one.

She told us her campaign should provide a blueprint for change and victory for the Democratic Party in 2020.

"People tell me on the street the reason, the first time I ever voted in my life, was vote for you because I felt like someone was finally fighting for me," she said.

The freshman congresswoman tells us new voters want to be motivated - the voting electorate in her election expanded by 68 percent in 2018.

She said the Democratic Party will win if it embraces progressive, liberal ideas like Medicare for all and free college tuition.

"If the right wants to feather and tar me because I believe healthcare should be a right in the United Sates then go ahead and do that," she said.

Dave Evans sits down with Rep. Alexandria Ocasio-Cortez to discuss howshe thinks the Democrats can win against President Trump in 2020.

Ocasio-Cortez also talked with us about the recent shootings in El Paso and Dayton. She said it frightened her that the shooter in El Paso talked of targeting Hispanics. She also blamed President Trump, accusing him of exacerbating the situation by trash-talking immigrants, Muslims and other minorities.

"What hurt most was not the President and his actions and his words. It was the fact that he's radicalizing stadiums of people in the United States. That's scary," she said.

Ocasio-Cortez has upset a lot of people, but on Trump and politics, she said don't ever question her patriotism.

"I put on this pin on every day and I put it on over my heart because my job is to serve and love the people of this country," she said.

She also has a message for her critics who say she isn't smart and she's only big because of social media. She said they can keep thinking that.

"I like being underestimated, it is a strategically advantageous position to be in."
EMBED More News Videos