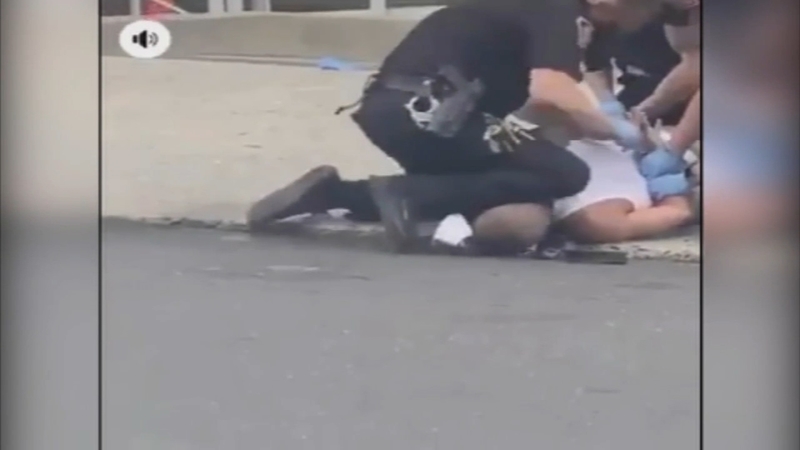 ALLENTOWN, Pennsylvania -- An investigation is underway after video shows an Allentown police officer kneeling on a man's neck during an incident outside a hospital over the weekend.

The video in question was posted by the group "Black Lives Matter to Lehigh Valley" on Saturday.

It shows an Allentown police officer kneeling on a man's neck outside St. Luke's Hospital-Sacred Heart on West Chew Street. The circumstances before and after what was captured on video are still unclear.

Two other officers are seen in the video restraining the unidentified man who is heard screaming as the officer shifts his weight from his elbow to his knee.

Chief Glenn Granitz with the Allentown Police Department says officers were outside the hospital on an unrelated matter when they observed a male outside who was vomiting and staggering in the street.

"When we saw the video. Every last one of us was shocked," said Black Lives Matter organizer, Justan Parker.

The video comes in the wake of the death of George Floyd, who was killed in May after an officer knelt on his neck for nearly nine minutes.

On Sunday, the attorney for the Floyd family shared the video saying, "@AllentownPolice held down this man's face to the pavement and then one of its officers placed their knee on his neck!! This happened yesterday and is exactly what led to #GeorgeFloyd's death. We need this officer's name and badge # NOW. #ICantBreathe."

Allentown police's use of force policy does prohibit neck restraints or chokeholds unless it prevents "imminent death or serious bodily injury to a member or citizen."

"Really there's two things in there. The knee to the back of head that shouldn't have happened and also, too, there's an accountability portion in there where officers that are seen excessive use of force are required to step in with this use of force policy and that did not take place," Parker said.

"The investigation into this incident is moving swiftly. Part of the investigation has included the review of a 23 second video posted to social media. Although significant, the entirety of the interaction is being reviewed. Witnesses are being interviewed and additional videos of the interaction are being reviewed. We plan on releasing relevant videos later this week as we complete this inquiry," said Granitz.