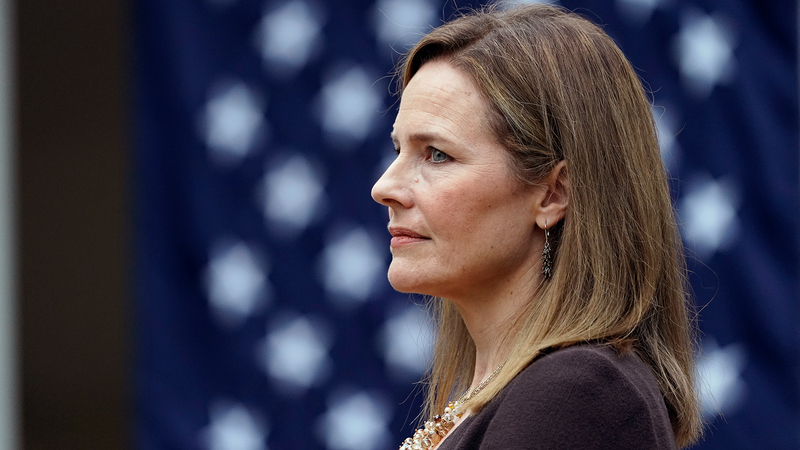 NEW YORK -- Lawmakers from New York, New Jersey, and Connecticut are offering their reactions to the nomination of Judge Amy Coney Barrett to the U.S. Supreme Court.

Amid the COVID-19 health crisis, Sen. Charles Schumer warned his colleagues that a vote for Barrett is a vote to strike down the Affordable Care Act.

If confirmed, Barrett would replace liberal Justice Ruth Bader Ginsburg on the bench and shift the nation's highest court heavily in favor of conservative views.

"In the midst of a pandemic, as the US hits 7 million COVID cases, Trump puts forth a SCOTUS nominee eager to kick Americans off their health insurance. Health care is a right. It'll take all of us fighting together to stop years of progress being rolled back," the mayor said on Twitter.

Schumer called Coney Barrett's nomination with just 38 days until the next presidential election a "power grab."

"Justice Ginsburg's dying wish was that she not be replaced until a new president is installed. Republicans are poised to not only ignore her wishes, but to replace her with someone who could tear down everything that she built," Schumer said.

Schumer's fellow senators from New York, New Jersey and Connecticut were also quick to weigh in.

READ MORE: What happens next in the nomination process?
EMBED More News Videos

New York's other senator, Kirsten Gilibrand, said in a statement:

"President Trump's nomination of Judge Amy Coney Barrett to the Supreme Court represents the further degradation of our democracy and the continued politicization of our judiciary. Even if this process had been legitimate, Barrett's anti-choice views, opposition to the Affordable Care Act, and hostility to immigrant rights and civil rights make her completely unfit to serve on the Supreme Court. I vehemently oppose Barrett's nomination and will vote against her confirmation."

New Jersey Senator Cory Booker took aim at President Trump's recent refusal to commit to a peaceful transfer of power if he loses the upcoming election.

"President Trump has repeatedly said he is counting on his nominee to vote in his favor in any election cases that might reach the Supreme Court later this year. That's not the way democracy is supposed to work in America," Booker said.

Connecticut Sen. Richard Blumenthal was clear in that he would not vote in favor of Coney Barrett or anyone nominated before the next president is decided.

"I will oppose the confirmation of Judge Amy Coney Barrett, as I would any nominee proposed as part of this illegitimate sham process, barely one month before an election as Americans are already casting their votes. The American people deserve a voice in this hugely consequential decision," Blumenthal said.

NEW: Joe Biden on nomination of Amy Coney Barrett for the Supreme Court: "The Senate should not act on this vacancy until after the American people select their next president and the next Congress.” https://t.co/jNuy7DbN6q pic.twitter.com/ngvdofNL3i