'An American patriot': What we know about slain California police officer Ronil Singh 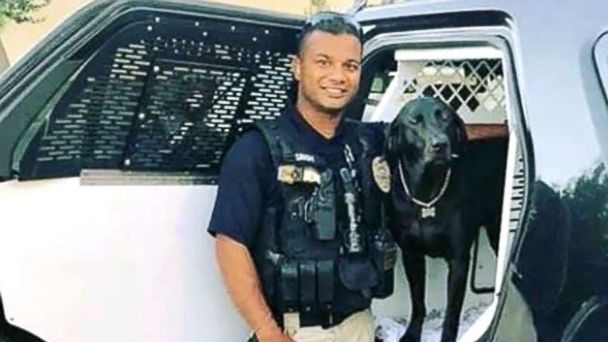 The California police officer whose killing sparked a massive manhunt left behind a wife and 5-month-old son.

Newman Police Cpl. Ronil Singh, 33, a native of Fiji who dedicated his life to law enforcement, was killed in the line of duty Wednesday.

The suspect, Gustavo Perez Arriaga, fled after shooting Singh at a traffic stop just before 1 a.m. Wednesday, according to the Stanislaus County Sheriff's Department. Arriaga was arrested Friday in Bakersfield, California, 200 miles south of where the alleged crime took place. Arriaga's brother and co-worker were also arrested and accused of acting as accomplices, authorities said.

Singh's brother, Reggie Singh, burst into tears as he thanked law enforcement for working so quickly to make an arrest.

"I'd like to thank you from the bottom of my heart," he said at a news conference Friday, overcome with emotion.

Singh had been with the Newman Police Department since July 2011, the sheriff's office said. He previously served with the Merced County Sheriff's Department, according to a statement from California Gov. Jerry Brown.

Singh's slaying was the first line-of-duty officer death in the history of the Newman Police, an agency of 12 members.

"This is a man that I saw every day he worked," an emotional Newman Police Chief Randy Richardson said of Singh at a Thursday news conference. "This is a man that I relieved on Christmas Day so he could go home and spend some time with his family and his newborn child."

"He will never see his son walk," said Stanislaus County Sheriff Adam Christianson, whose agency is leading the investigation. "He doesn't get to hold that little boy, hug his wife."

Richardson said Singh was an avid outdoorsman who loved fishing, hunting and riding his jet ski.

He said Singh was also a K-9 handler whose drug-sniffing dog, Sam, was with him when he was killed.

"When I pulled Sam out of the car, Sam was wearing a Mrs. Claus outfit that he [Singh] put on her because it's just the kind of guy he was. It's just the little things like that he did just to bring smiles to people's faces," Richardson said.

He said one of the last photos Singh posed for was of him standing in front of an American flag and next to a Christmas tree outside the Newman police station.

"He was truly just a human being and an American patriot," said Christianson.