Jews celebrate at MetLife Stadium in NJ after surge in attacks 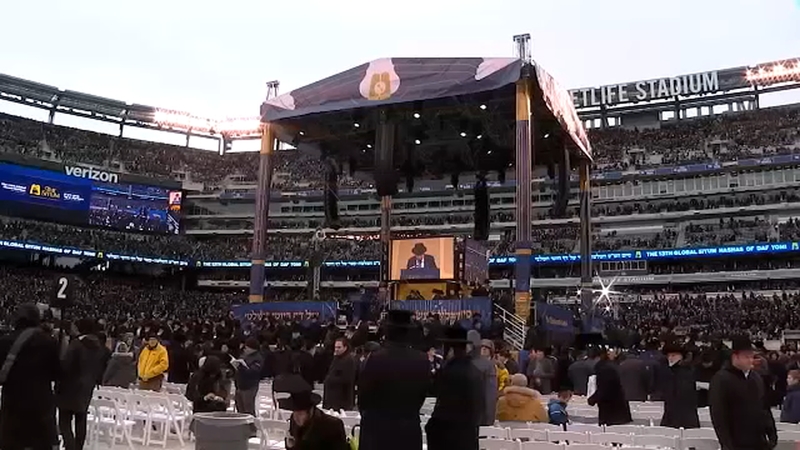 Jews celebrate at MetLife Stadium after surge in attacks

RUTHERFORD, New Jersey (WABC) -- More than 92,000 Jewish men and women congregated on New Year's Day at MetLife Stadium in New Jersey to celebrate the reading of the entire Talmud in an event called Siyum HaShas.

The large scale gathering of Jews will drew a significant security presence after recent anti-Semitic attacks in the area.

The New Year's Day event celebrated the completion of the reading of the 2,711-page Babylonian Talmud, a process that takes 7 1/2 years.

The Talmud contains discussions of Jewish law that guide every aspect of life.

Governor Phil Murphy greeted the crowd which filled the stadium to show his support for the event and the Jewish community.

Rabbi Yosef C. Golding, an organizer, told The Record that he has worked with more than 50 law enforcement agencies on security for the event and that more than 300 uniformed state police were standing by.

The Siyum HaShas was broadcast internationally.

The gathering in the meadowlands took place at the same time as another Siyum HaShas event at The Barclay's Arena in Brooklyn with about 20-thousand Jews. Extra security was in place to keep large crowds safe.

There also have been several street assaults in New York City in recent weeks.