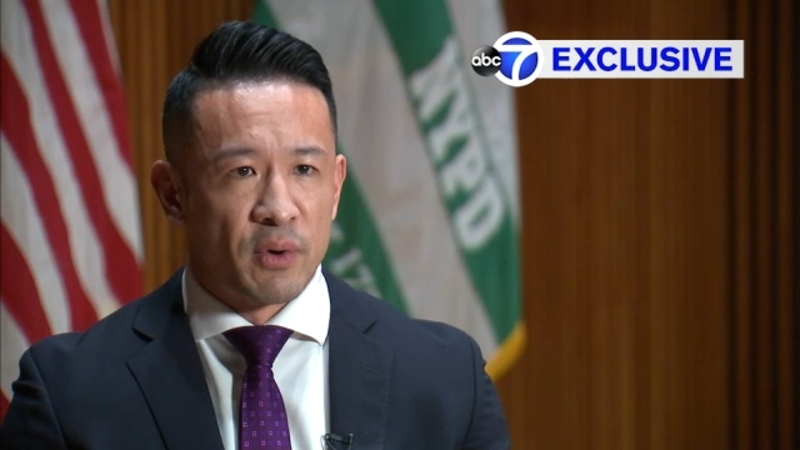 NEW YORK CITY (WABC) -- A string of violent attacks across New York City, targeting Asian Americans, has the community on edge and demanding more to be done to protect them.

After a week where three vulnerable Asian Americans were violently assaulted in seemingly unprovoked attacks just seven hours apart, there has been simmering anger in the community.

In fact, Eyewitness News learned Friday of a fourth incident that took place on Monday in Harlem, where a 27-year-old Asian American man was told to go back to China and was punched in the face.

This has prompted many in the community to ask why cops aren't investigating the possibility of hate crimes charges?

In an Eyewitness News exclusive earlier this week, a 71-year-old, who was slugged in the face on the E train, said just because a racial slur wasn't hurled at her doesn't mean it wasn't racially motivated.
EMBED More News Videos

Two other non-Asian women were sitting next to her she says, and yet she was singled out.

"I agree with her. And I think the crime was investigated as a potential hate crime," said Stewart Loo, the commanding officer of the Asian Hate Crimes Task Force. "I think the department doesn't express what we do correctly. Just because we don't have the evidence yet doesn't mean we're not investigating as a hate crime."

Loo says when he's involved, it's always possible it could be a potential hate crime.

That of course is news to the community.

In this exclusive one-on-one sit-down interview, Deputy Inspector Loo says they are involved in every case with an Asian American victim.

The task force was created in August, a month after an Eyewitness News exclusive, where an 89-year-old Brooklyn grandmother was lit on fire.
EMBED More News Videos

CeFaan Kim has an exclusive interview with an 89-year-old woman who was set on fire by two men in Brooklyn.

Loo says he was infuriated and says it was inspiration for him to create the task force.

"Historically Asian Americans have been victims at a disproportionate rate in New York City," Loo said. "And the service they get from the police department, they don't really look for it because they don't speak English, they're afraid of the police, there's cultural barriers and differences."

"There is no real resource behind it, so I don't know what work they're doing, and I don't know what progress they've made which is a real shame because right now our community is really fearful. We're afraid to come out," said JoAnn Yoo of the American Federation.

Actress Oliva Munn credited the NYPD and "everyone on social media who cared" with identifying the suspect who shoved her friend's mother during an assault at a Queens bakery earlier this week.

However, Loo says other police departments would not have been able to form a task force of 25 Asian American detectives capable of speaking over 10 different languages.

According to the NYPD, there were 29 anti-Asian hate crimes reported in 2020.

Twenty-four of those were motivated by COVID xenophobia.

Loo says he has personally met with almost all of those victims and that the task force has solved a number of cases already.

"We're making progress. We didn't have a task force before. This is one of the few departments that can actually have a task force like this," Loo said. "If you speak to our victims, they're more than appreciative."