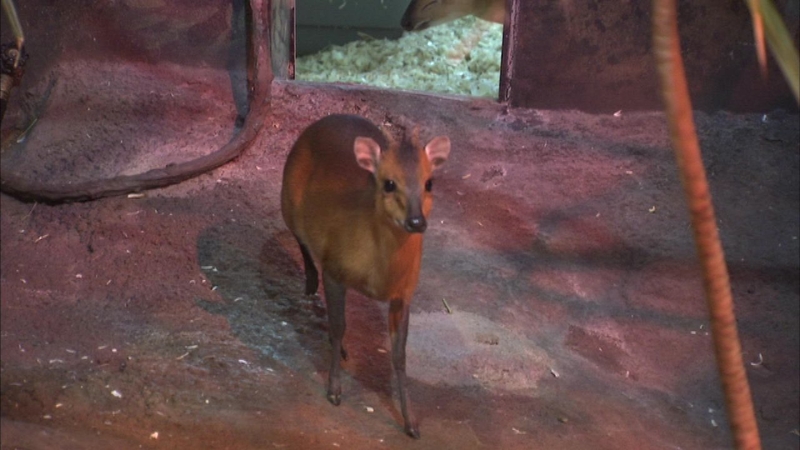 BROOKFIELD, Illinois -- A baby antelope was born two weeks ago at the Brookfield Zoo, and the little boy is so tiny he can be held in the palm of a hand.

The yet-unnamed-baby was born to Ziggy and Hank, two extremely small antelopes from central Africa.

He is now living in the zoo's Habitat Africa. In the forest exhibit on Tuesday, he could barely be seen in the corner. The red flanked duiker is a creature disappearing in the wild.

"These animals are losing some of their habitat and they're also animals that are being taken for their bush meat. And what that means is they are rounding up large numbers of duikers in the African forests for human food ant that's effecting the population," said Joan Daniels, assistant curator of animals at the zoo.

Every few days, the baby is removed from the exhibit as part of a medical checkup. He doesn't always like it but it's part of the routine.

"Part of our monitoring of the calf includes weighing it frequently to make sure it is growing and developing normally," Daniels said.

The frisky calf obviously won't stand on a scale so it's the old subtract-the-weight-of-the-box-from-the-total-weight method. In just two weeks, he's growing fast.

"He's gained quite a bit of weight. He was about two pounds at birth and he's close to four pounds now which is wonderful," Daniels said.

And then it's back home to see mom Ziggy and a very uninterested dad Hank.

The antelope is called a red flanked duiker because they have a red tinge to their flanks. Duiker is a German word that means diver -- they dive fast back into the forest when danger shows up.

"They're pretty small so they're taken by leopards, pythons, eagles and then again humans," Daniels said.