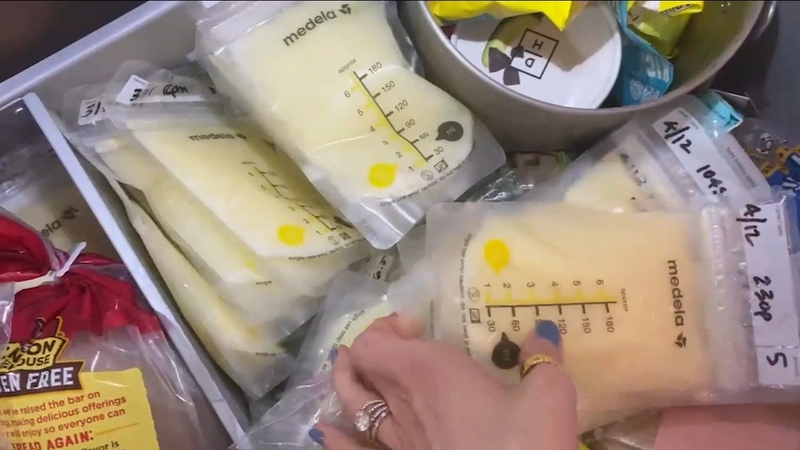 NEW YORK CITY (WABC) -- With so many families struggling to find formula some women in New York are stepping up to donate milk.

Twenty-nine-year-old Lucie Fink is one of dozens of women across the state donating extra breast milk to families who are need help feeding their babies.

She recently posted a video about the difficulties that come along with being a new mother and the myths around breastfeeding. She was shocked when it received over 350,000 views, but Fink said it makes sense as families all across the country struggle to feed their babies.

"There's already so much stigma with women about breast feeding and formula, it's just too much to put on our plate to now have no formula available for people who need it," Fink said.

She decided to donate the extra to the New York Milk Bank in Valhalla, the only one in the state.

The donated milk eventually ends up in hospitals for premature babies.

RELATED | Homemade baby formula could be dangerous: What parents can do amid shortage
EMBED More News Videos

"For them it is a medial necessity, human milk is magical for them," said Linda Harelick the Executive Director for the New York Milk Bank.

When there's excess product that isn't used in hospitals it's sold to the public.

"We will work with families for financial assistance as much as we can and as well as contacting their insurance company," Harelick said.

Donors go through a rigorous application process. The milk is screened in labs, tested and prepared for recipients.

"You see these women who want to donate, they're so generous and it's really inspiring," Harelick said.

The milk bank has seen an increase in donors recently. Before one or two women would reach out daily to donate, now they receive about 20 inquiries a day.

"I really feel like anyone that has any over supply or just slightly more milk than needed right now, should consider it ," Fink said.

So far Fink has donated 150 ounces and is is happy to give more.