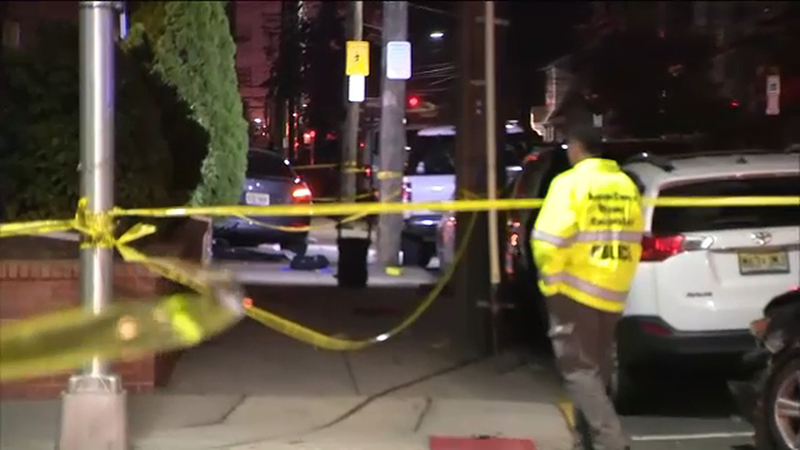 BAYONNE, New Jersey (WABC) -- The grandmother of a toddler pinned under a car after a crash in New Jersey Halloween night is now speaking out.

Three children were injured, one critically, when the crash sent a car onto a sidewalk in Bayonne.

Mayor Jimmy Davis said two cars went through an intersection at 16th Street and Avenue C around 8 p.m. Wednesday and collided, causing one car to jump the curb and travel about 75 feet on the sidewalk and into a garage.

The victims -- two young children trick-or-treating with their grandmother and a 17-year-boy not related to the others -- were struck by the vehicle.

"We don't go in the night anymore.. no more Halloween, no more for me," said the grandmother, Maria Liriano, with a cousin translating.

The car jumped the curb and headed straight for Maria, 1-year-old Jake, 5-year-old Ricky, another child who is also a family member, and the teen.

"We heard a poof and we looked back and the car was coming towards us," Maria said.

Jake is home with just cuts to his face, despite being trapped under the car. Maria had tried to push it away.

"It was terrible, there was a baby under the car and my son-in-law turned off the car because it was smoking and he grabbed the baby out," said Bayonne resident Lisa DeCicco.

Jonathan Acosta and his dad also jumped in to help pull the car off the baby.

"I didn't see the baby, but my dad says the face was all bloody and the body was all purple," Acosta said. "I can't get that image out of my head, of the guy, though. It's just permanently engraved in my head."

Jake was treated and released, while Ricky remains hospitalized in serious but stable condition.

The 17-year-old was unconscious and his body mangled, and he was rushed to the hospital in critical condition. He has since been upgraded to stable.

"I pray God comforts them and gives them the strength to go on. It's terrible what happened," said DeCicco

The drivers remained on the scene. Both claimed they had the green light.

"You got four people injured, it doesn't get any worse than that, one being a 1-year-old and a 5-year-old," Davis said. "The only thing you can say is you pray for the best for all the families."

Acosta told Eyewitness News that something was suspicious with the driver who crashed into the garage.

"People were asking who was driving the car," Acosta said. "And he said 'me,' and I think he said some other stuff, but his words sounded all slurred."

The Hudson County Regional Collision Unit and the Bayonne Police Department are conducting an accident investigation.