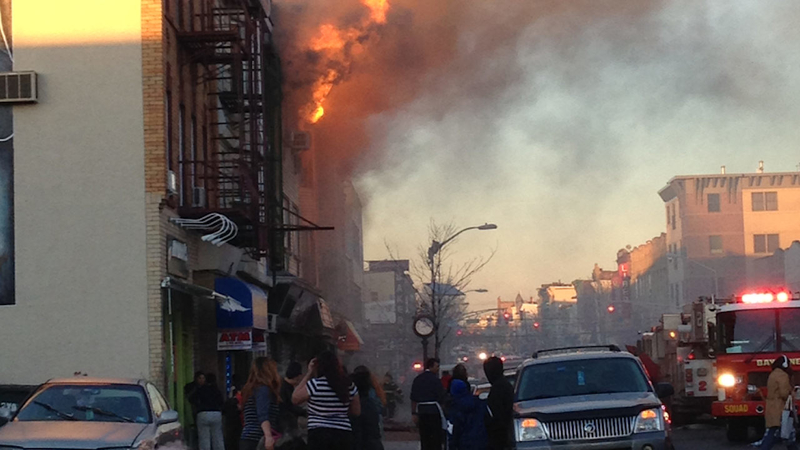 Many left homeless after Bayonne fire

The flames broke out around 4:40 p.m. inside 743 Broadway and then spread to two neighboring buildings. Fighting intense flames on bitter cold night, firefighters in Bayonne were not only working under pressure but in extreme conditions.

After several hours, firefighters managed to get the blaze under control but more than a dozen apartments, in addition to a restaurant and clock store were damaged.

According to the Red Cross, at least 20 people were displaced Wednesday morning. It is providing assistance and shelter to all those affected at Bayonne High School.

"I smelled something burning in my living room, looked out saw the fire and that was it," said James Herer, a displaced resident.

Smoke from the massive blaze could be seen for miles as firefighters from several surrounding communities attacked the fire from every direction.

"One of our firefighters when he entered got trapped up on the third floor and managed to get out through a window," said Bayonne Fire Department Chief Greg Rogers.

Rogers said the freezing temperatures also presented another set of challenges for responders. "Conditions here are cold, it's really freezing, it's slippery, there's ice everywhere, a lot of guys were going down," he said.

"Scared there are little kids that lived in there, all little girls," said Jaqueline Priugo, a tenant.

"It's freezing, yeah we have nowhere to go so we're just kind of, what are you going to do," said Savannah Lindley, a tenant.