7 On Your Side: Queens cemetery still in disrepair despite development deal 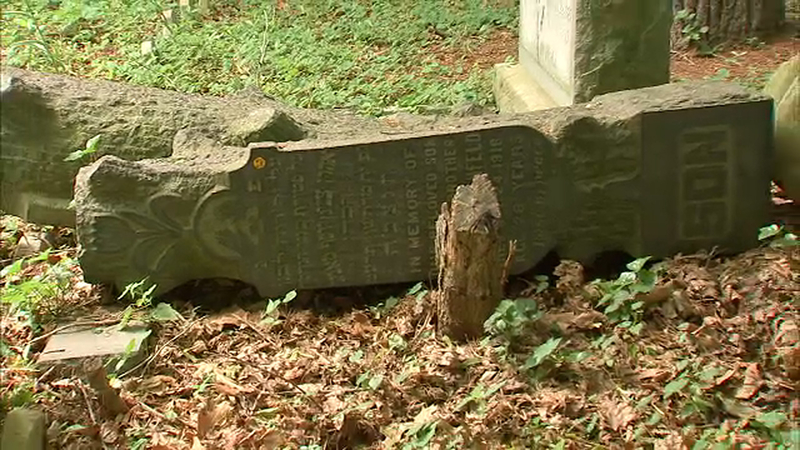 7 On Your Side: Queens cemetery still in disrepair despite development deal

BAYSIDE, Queens (WABC) -- A 7 On Your Side Investigation has found that an historic Jewish cemetery in Queens remains in dangerous disrepair nearly a year after a multi-million dollar development deal.

The owner of Bayside Cemetery, Congregation Shaare Zedek, sold their Manhattan synagogue for $34 million last July. But a visit two weeks ago by 7 On Your Side's Investigative Team found a cemetery in a serious state of disrepair and ruin.

Thousands of tombstones are either toppled or damaged, and some mausoleums are so damaged they've been cemented shut to keep out vandals. Sadly, it also keeps families from being able to visit their loved ones.

"It's my parents, and I can't give them respect, " said Helaine Geismar Katz, whose great grandparents and grandparents are interred in a badly damaged mausoleum.

Katz's parents were removed from the mausoleum several years ago and buried next it, so vandals could no longer disturb them.

"They're not cared for here," she said. "I blame the synagogue."

Anthony Pisciotta, who lives near the cemetery in Ozone Park, has volunteered thousands of hours in what he says is a losing battle to try to restore some dignity to the 16-acres filled with 35,000 graves.

"I wouldn't wish this on someone I hated," he said.

Pisciotta says that once Shaare Zedek sold their synagogue, he thought for sure he would have seen some boots on the ground as part of a visible attempt to begin to clean up Bayside.

"It's really like a garbage dump," he said. "You can't bring anybody in here now. "

He says the cemetery is unsafe because of falling trees and monuments.

"They're compromised," he said. "It's not safe for anyone."

Shaare Zedek got a million dollars when the sale was approved and then in November received an additional $600,000 while awaiting the complete $34 million payment. The President of Congregation Shaare Zedek, Michael Firestone, says they used some of that money to hire a project manager to develop a master plan for the repair of the cemetery. Firestone says they also have signed contracts for $300,000 to begin landscaping work.

The question some families have is why didn't Shaare Zedek begin cleanup last year rather than wait until just two weeks ago to start?

"We were reluctant to begin projects that we were uncertain we would be able to complete without full payment from the developer," Firestone said.

Landscapers began working at the cemetery on June 15, which happens to be the day 7 On Your Side visited Bayside.

The New York Attorney General's Office has mandated that Congregation Shaare Zedek set aside $8 million from the sale of the synagogue for long-term care of the cemetery. Firestone tells 7 On Your Side that two weeks ago, the congregation board approved a long-term cemetery plan.

After years of effort, Shaare Zedek reached agreement with the Attorney General's office in 2017 to dedicate $8 million, half of the cash proceeds from the sale of its longtime synagogue building, to a reserve fund for the benefit of Bayside Cemetery. We made that agreement because Shaare Zedek is committed to ensuring both the long-term financial stability of Bayside Cemetery and the continued existence of the third-oldest Jewish congregation in New York City. That's why we are pleased to announce that we have signed contracts for more than $300,000 of much-needed landscaping work (itself only the beginning of the larger capital program made possible by the transaction) and ongoing, professional maintenance after that. We expect to receive final bids for repair of the mausoleums and the Cemetery's gatehouse in the next week.

Although we had hoped to begin work as soon as possible after receiving court approval in July 2017, circumstances ultimately dictated a more conservative path.

While a $1 million deposit was released from escrow when we received court approval in July 2017, it was unclear when we were going to receive the balance of the funds from the developer, who had a contractual right to extend the payment date for up to nine months after Shaare Zedek vacated the building and delivered possession to the developer. Since the cemetery's capital repair program alone was projected to cost $1 million or more (considerably more than could be funded from half of the $1 million deposit), we were reluctant to begin projects that we were uncertain we would be able to complete without the full payment from the developer. That is particularly true for the landscaping, which was projected to be one of the largest components of the program. Once the clean-up was underway, it would be essential to both complete it and immediately begin ongoing maintenance, or the initial clean-up work could be lost to natural growth.

Shaare Zedek began moving out of the building on October 1, 2017 (immediately following the conclusion of the Jewish High Holidays) and completed our move-out in November. The developer, however, chose to exercise its right to extend the payment due date, both assuring us that payment would be forthcoming shortly but prolonging our uncertainty.

In November 2017, still expecting the developer to fully fund the project in short order, we retained a project manager to conduct a full assessment of the necessary capital projects at Bayside and to begin soliciting bids from interested contractors, including landscapers. It should be noted that the Cemetery has approximately 32,000 graves and dozens of mausoleums, and covers approximately 16 acres. Thus, the required capital repairs could not proceed absent this preparatory work. By April, 2018 we had selected a landscaper and negotiated contracts for both the one-time remediation work and ongoing maintenance. Although we had not yet received the funds from the developer, we applied to the Attorney General's office on May 4, 2018 for approval to enter into the landscaping contracts (as required by the court order), because given the start of the growing season, the landscaping required immediate attention and we determined that we could not wait for the balance of the funds from the developer.

The developer funded the balance of the deal on June 8, 2018. At that point, even though the Attorney General's approval of the landscaping contract had still not been received due to issues beyond our control (including a change of staffing at the Charities Bureau), we negotiated an arrangement with the landscaper to structure the payments in a way that would permit work to begin even without final approvals from the Attorney General and the court (with Shaare Zedek agreeing to "backstop" the contract from non-cemetery funds if necessary). The landscaper ultimately began work on June 15, and considerable progress has already been made, while we continue to pursue the necessary legal approvals from the Attorney General and the court. The landscaper expects to complete the remedial work by the end of July, at which point they will commence ongoing maintenance under a separate contract with Shaare Zedek.

As required by the court order, Shaare Zedek's board also approved a long-term plan for the cemetery on June 20, which will shortly be submitted to the Attorney General's office for review, with formal requests to approve various capital projects to follow. We are continuing to work closely with our selected project managers to evaluate projects and review bids and look forward to significant progress at Bayside Cemetery in the coming months.