Anti-Gentrification flyers pop up in Bedford-Stuyvesant 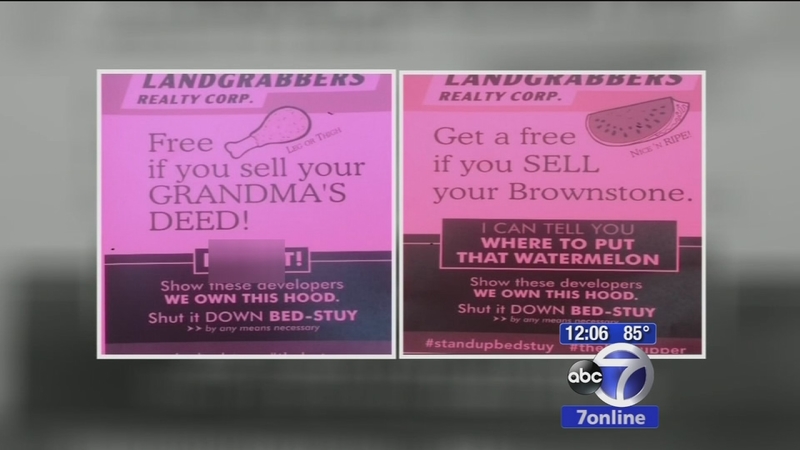 BEDFORD-STUYVESANT (WABC) -- Flyers with racist images showed up in a Brooklyn neighborhood.

Offensive imagery for an offensive practice is now sparking much debate.

At first glance it's just hard to believe.

"With a big giant watermelon on it? This is a flyer?" a resident said.

The imagery is so overtly racist.

"What is the point of this watermelon here?" another resident said.

"Shut it down Bed-Stuy. All right, who wrote this?" a neighbor said.

The flyers, which popped up throughout Bedford-Stuyvesant this week included images of watermelon and fried chicken, supposedly to warn homeowners about a troubling trend.

"They're using offensive imagery to start a conversation about a vastly more offensive practice," said Gregorio Smith, a resident.

Many, single family homes have been passed down for generations.

But Kevin Harrell say he's had it with would be investors knocking on his door.

"One guy came down with a bag, literally a bag of money, opened the bag and said, 'If you want to sell your house. I'll give you this much,'" Harrell said. "I really get to a point where I get upset. It's like harassment."

When it comes to the elderly, residents say some developers have been outright predatory specifically pressuring the elderly them to take pennies on the dollar for homes worth hundreds of thousands.

"People are very aggressively going to the homes of our elders, and demanding that these elders sell their homes or relinquish their deeds for piddlings," said Tremaine Wright, the chair of Community Board 3.

No amount of money is going to get him out.

When it comes to that flyer, well like the brokers knocking on his door he's not letting it bother him one bit.