Call for criminal justice reform after parolee kills family, self in Bellport 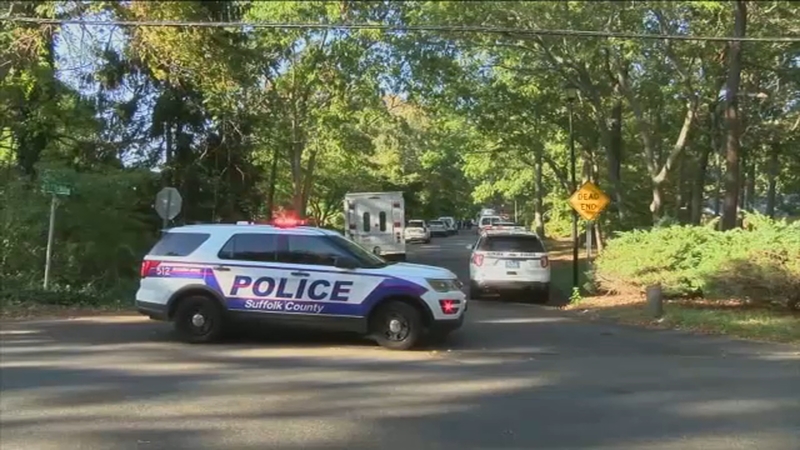 Call for criminal justice reform after parolee kills family, self

BELLPORT, Long Island (WABC) -- A gruesome discovery in Suffolk County is now leading to a push for criminal justice reforms.

Two bodies were found in Bellport last week, and the suspect in the case died by suicide.

Police say the deaths could have been prevented if William Farnum, 43, had stayed in jail.

Suffolk County Police had found a horrific scene at the home in Bellport, while trying to notify next of kin after a driver took his own life following a traffic stop.

Police say they performed a traffic stop on a 2003 Honda Civic at an intersection on Montauk Highway in East Patchogue around 10 a.m. last Tuesday.

Farnum was pronounced dead at the scene.

When detectives went to the home in Bellport to notify the suspect's relatives, they discovered the bodies of his father and sister inside the home.

Farnum was released from prison after serving time for grand larceny, criminal possession of stolen property, and drug possession, among other criminal activity.

Officials say there is a need to repeal criminal justice reforms and bail laws that allowed for this dangerous felon's release from prison to do greater harm to his family and compromise public safety for local residents.

"I think that Mr. Farnum is also a victim. He's a victim of our system that failed him, because maybe, just maybe if he had been kept in custody and observed for a longer period of time by law enforcement professionals at every level, not just at the police department when he's arrested and processed, the sheriff's department with the deputy sheriff's who would have held him pending his appearance in court, and if he was held without bail our correction officers, three separate groups that would have had an opportunity to observe," DiGerolamo said

Farnum served four stints in state prison for burglary, robbery and attempted assault. He was arrested back on September 8th by Suffolk police for allegedly trying to break into cars at Bellport Middle School.

Police say when they tried to arrest him, he resisted arrest and they had to use a Taser to finally bring him into custody. He was sent to a hospital for a mental health evaluation and was later released.

A spokesperson for the New York State Department of Corrections said Farnum was arrested on July 15 for grand larceny in the fourth degree.

"He was subsequently directed by his parole officer to report to his assigned parole office, which he failed to do," Corrections spokesperson Thomas Mailey said. "Once it was determined he had absconded a warrant was issued and additional efforts to apprehend him ensued. Those efforts to locate Farnum were ongoing at the time of his death."

Reverend Terrence Buckley with Christ Episcopal Church in Bellport said Amanda Farnum, William Farnum's sister, was a longtime, active member of the church and had been since her childhood.

Buckley said she had spoken to him about her brother.

"She seemed kind of torn between wanting to help him and also being afraid of him at the same time," Buckley told Eyewitness News reporter Kristin Thorne.

Buckley said Amanda Farnum had been caring for her sickly father who also lived at the home on Doane Avenue. Her mother died a few years ago.

He said she had turned to the church for help in recent years.

"I'm grateful in the last few years she turned to the parish, to the church family to try to help her," he said.

Buckley said the church is hoping to help with Amanda Farnum's funeral arrangements.

A neighbor and friend of Amanda Farnum said she filed a restraining order against her brother after he returned home from state prison and allegedly choked her inside the house.

The friend, who did not want to disclose his name, said when William Farnum began living in the woods in front of the home, Amanda Farnum rescinded the restraining order because she felt guilty.

He said William Farnum had terrorized the neighborhood for years and he is glad Farnum is gone.

A spokesperson for some of the Democratic senators on Long Island who voted for bail reform said the fact that William Farnum was released repeatedly from jail in July, August and September was not the result of bail reform, but rather was a general failure of the justice system, particularly the parole system.

"As has already been reported, this horrible situation has nothing to do with bail reform. It is shameful that the PBA is politicizing a tragedy and using 'alternative facts' because reality doesn't fit their warped narrative," said Gary Ginsburg.